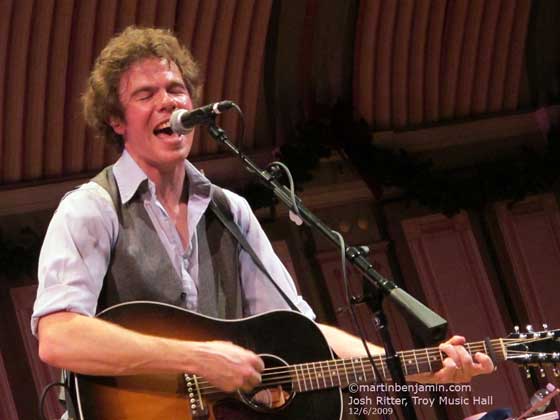 Playing to what looked like about a half-full Troy Music Hall on Saturday night, Josh Ritter was no less enthusiastic for it. Before a truly “all ages” audience, Ritter and his band generously wove their way between quiet, acoustic moments and full-out rocking ‘n’ rolling, delivering a jewel of a show in a setting that echoed that perfectly.

Why does the guy smile so much? He is clearly having a grand time and surely loves what his band-mates can produce with him. Still, it makes you wonder. He does smile ear-to-ear more at what comes out of his band than his own performance, I think. He is having a great time.

He opened the show with “Idaho,” and he also offered two new songs from his yet-to-be-released next album. For an encore, he trotted out Springsteen’s “The River,” versions of which can be found on the web.

“Snow Is Gone” was the ironic ending to a special performance that sent the audience walking out onto 2nd Street into a driving snow coming down sideways.

PS: There is a new video posted on Ritter’s website of keyboardist Sam Kassirer digging the Steinway grand piano and the Troy Savings Bank Music Hall’s renowned acoustics during their soundcheck. He’s playing Ritter’s “Rumors” for himself – just to experience that piano in that magical place. (There’s also a short vid of bassist Zack Hickman backstage at the Music Hall, doing a bit of Chris Isaak’s “Wicked Game.”) 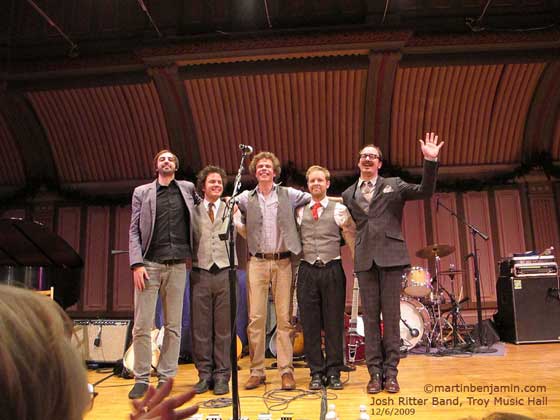