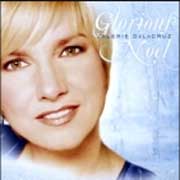 Capital Region singer-songwriter Valerie DeLaCruz is probably best known for “My Girlfriends Quilt,” a song that she wrote which later formed the basis of an hour-long public television special of the same name. That was five years ago.

She readily admits that music had taken a back seat in her life during those ensuing years.

“It was a joy, however, indulging myself to go back to Nashville and record this Christmas album with my long time producer Mark Oliverius,” she admits. “I think I miss studio singing most of all – the process, the collaboration, the nuance that can be captured in the intimacy of the sound booth.”

That sense of warmth and intimacy is in full flower on “Glorious Noel,” a collection of nine classic Christmas carols. DeLaCruz sings with grace and assurance, as she eases through gems like the opening “Away in a Manger,” “It Came Upon a Midnight Clear” and “O Come All Ye Faithful.” She doesn’t jazz them up or twang then down. She just sings them straight from the heart, focusing on the strength of the melodies to carry the message home.

These traditional songs of the season are wrapped in lush, easy-listening arrangements and orchestration, although producer Oliverius gets a little carried away with “O Holy Night,” underscoring it with a hip-hop shuffle drum track and bringing it to an over-the-top conclusion that sounds as though it’s headed for Trans-Siberian Orchestra prog-rock territory.

DeLaCruz wraps up the disc with the lone original tune – “You Make Me Believe.” And while it doesn’t quite measure up to the classic carols that precede it, it’s one of those all-too-rare newly penned Christmas songs that actually bears up well to repeated listening.

This album isn’t likely to get a lot of spin at the office Christmas party. It’s too ballad-heavy for that. But it’s a fine soundtrack for a snuggle by the fireplace with that certain special someone, as the snow drifts down outside the window.

“Glorious Noel” is available directly from DeLaCruz, as well as from such outlets as CDBaby and Amazon.