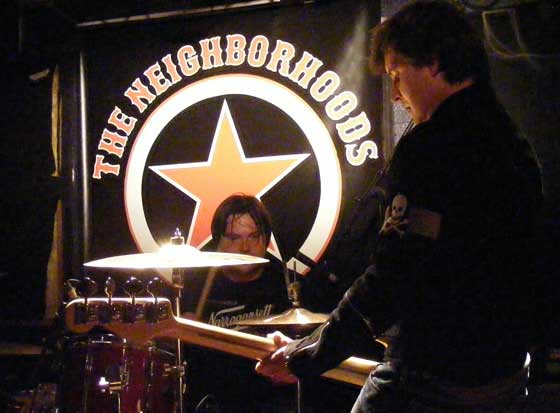 The Return of the Reptile Men…

Boston’s Neighborhoods reunited in 2004 after 17 years of not being a band. The reunited ‘Hoods have played sparingly since – six New England-based gigs or so a year – but Albany has always been on the band’s radar.

The ‘Hoods/Albany relationship brought with it a heightened sense of anticipation on two fronts: would Albany represent and could the Neighborhoods still deliver?

The upstairs at Valentine’s was full of familiar faces, littered with musicians and sprinkled with long-time fans like the crew known as the Steel Tips from Boston. At 11:30pm, the long wait was over, and it was now the ‘Hoods’ turn to give as good as they got.

Three minutes into the set that opened with the musical barrage of “Real Stories,” there was no doubt we were in for a special night. Bassist Lee Harrington sang such gems as “Diane” and “King of Rats,” mixed in with songs spanning four decades and punctuated by “Parasite” – recorded in 2006 for Guitar Hero II.

As for the mystery blond chick undaunted by her failed attempt to gain the attention of Harrington, she succeeded in infiltrating Dave Minehan‘s, when she leapt up, shimmied across the stage and wound up in a rock embrace that somehow still allowed Minehan free to play his guitar and grin. No one seemed to know who she was.

The promised marathon set – as is Albany tradition – was not the special surprise. For the first time ever the ‘Hoods played their album “Reptile Men” in order and in its entirety. It was a glorious thing to behold.

Sir David Minehan is to the manor born a star. When he hits the stage, he hits it hard; still a blur of energy and passion, aided by his Les Paul and Marshall stack. John Lynch made his Albany debut to the faithful in rare form with a relentlessly dead-on solid – and sometimes absolutely brutal – drum attack that made believers of us all. The always fashionable Lee Harrington’s sonic bass lines, killer vocals and rock ‘n’ roll stance anchored the unit.

By the end of the night the first snow outside gave way to a sweat-soaked revival meeting of a set on the inside.

In a post-gig chat with Lee, he said that he and the band “feel more relaxed when playing away from the Boston area, where at hometown gigs, we tend to tighten up a bit. Here in Albany, we could just play.”

I have traveled to Boston to see an average four reunited ‘Hoods gigs a year. In my experience and in the opinion of many of the tight-knit loyal ‘Hoods camp-followers, this was one of – if not the – best show of the reunited ‘Hood era. If you weren’t there, you don’t know. You had to see it. It was a rare gift. It was magic. It was the ‘Hoods! There is no guarantee that there will ever be a next time. Oh brother, you missed it!

You can also view an additional collection of black and white photographs – more than 100 of ’em – from the snap-happy fingers of Bryan Thomas.