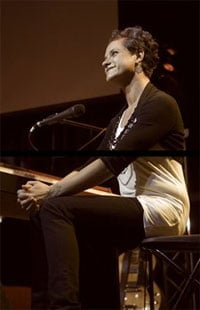 For Danielle Gaudin, music was a dream deferred.

Since age five, music had been her inspiration -first at the piano, then with her guitar. By the age of 14, she was writing her own songs and hitting the Nippertown coffeehouse circuit as an acoustic duo with her best friend.

“Then my best friend moved on to California, and I got married and had my daughter at age 20,” Gaudin recalls. After a divorce, she found herself working two jobs and struggling as a young single mother.

Music was relegated to the backburner. “I had songs constantly running through my mind, but I had to push them aside,” continues Gaudin.

These days, Gaudin is embracing her musical muse. At the urging of her sister, the 28-year-old Gaudin entered the Capital Region’s Got Talent singing competition at the very last minute. After weeks of tough competition at Revolution Hall in Troy, Gaudin was named the winner, earning her $5,000, a demo recording session and headline concert spot at Revolution Hall.

And make no mistake about it, Gaudin is making up for lost time. Just three weeks ago, Gaudin celebrated the release of her debut CD, “You Started It.”

And on Saturday (December 12), Gaudin celebrates the release of her second full-length CD, “Songbird.” Appropriately enough, the release party and concert is being held at Revolution Hall. Also performing on Saturday will be several other top finalists from the Capital Region’s Got Talent competition.

“Songbird” certainly displays considerable talent, but it might not be what you’re expecting to hear. As the winner of a singing contest, Gaudin knows how to use her voice to wring the most from a song. She’s a good vocalist, but she doesn’t resort to the usual “American Idol”-style vocal acrobatics.

In fact, surprisingly enough, Gaudin’s voice isn’t really her strongest musical asset. As it turns out, she’s an even better songwriter than she is a singer. The bulk of these dozen tunes are offered in straight-up pop fashion with piano as the primary instrument, augmented by synth strings and drum machine.

But Gaudin also knows how to mix it up stylistically. “Onto Something” is underscored with an insistent hip-hop shuffle beat, while the broken-hearted “How Long” is carried along by an almost classical sounding piano figure. “Situations” takes a tougher musical stance, leaning more toward a soulful rock edge.

“Songbird” isn’t quite a polished, finished product. The songs, the singing, the musicianship and the arrangements are all in place, but the album could benefit from an outside production touch. It’s good as it is, but it doesn’t boast the sonic polish needed for radio play.

And believe me, these songs are all radio worthy.

Danielle Gaudin celebrates the release of “Songbird” with a triumphant return to Revolution Hall in Troy at 8:30pm Saturday (December 12). She’ll be joined by the other Top 5 finalists from the Capital Region’s Got Talent competition – Sharon MacPherson, Danielle Mozeleski, James Dowen, Courtney Biondo and Eric Margan.