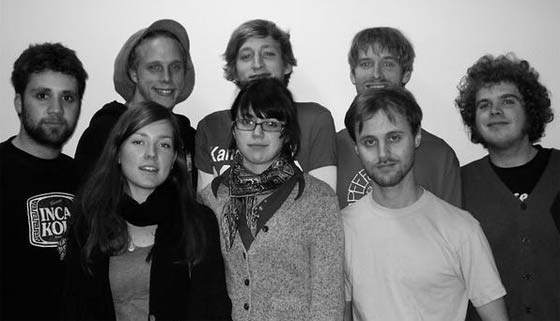 Featuring some of the Northeast’s finest instrumentalists and songwriters – including Ben Davis, who also lends his considerable musical talents to Saratoga’s own Railbird – Cuddle Magic plays carefully arranged acoustic avant-pop music with rhythmic
sophistication and an undeniable groove.

Drums, hand percussion, violin, trumpet, ukulele, clarinet, vibraphone, electric piano and banjo are just some of the ingredients to be found in the group’s eclectic, yet potent mix.

Beginning as a small chamber ensemble in the fall of 2006, Cuddle Magic has slowly accrued a cast of a talented songwriters and instrumentalists from New England Conservatory’s fertile musical community and grew into the large ensemble that exists today. Bandmembers hail from Philadelphia, Boston and NYC.

Cuddle Magic’s sophomore album, “Picture,” is slated for release on February 9, on FYO Records, but you can catch a sneak peek at the songs when Cuddle Magic drops into the intimate Spring Street Gallery in Saratoga Springs on Wednesday (December 16). Showtime is 8pm, and admission is $10.