Eileen Ivers, What Was The First Record You Ever Bought? 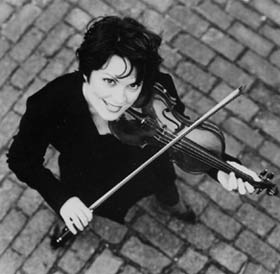 “As I started out playing the Irish fiddle, I was really just getting Irish stuff – Irish fiddle music by bands like the Bothy Band and Planxty, who were around in the ’70s. That was the kind of stuff.

“Then for my own kind of relaxing listening – well, it’s kind of geeky, I know, but I know I was into Boston and those kinds of groups. That would have been my little collection on the side, so to speak.”

Fab Celtic fiddler Eileen Ivers – hailed by The New York Times as “the Jimi Hendrix of the violin” – heads up her holiday concert tour titled “An Nollaig: An Irish Christmas” at the Colonial Theatre in Pittsfield, Mass. at 8pm Saturday (December 19).

Odds & Ends At The End Of The Week