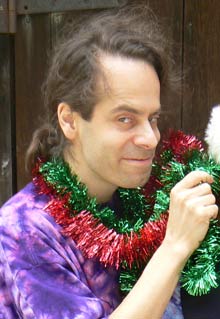 1. THE FIRST ALBUM I EVER BOUGHT WAS … Fleetwood Mac’s “Rumors” (My sister gave me the cassette as a Christmas present), and the first I ever bought was Elton John’s “Tumbleweed Connection” (at a used record store).

2. THE FIRST CONCERT THAT I EVER SAW WAS … Morty Pepweiller and his So-So Orchestra

3. THE FIRST MUSICAL INSTRUMENT I EVER OWNED OR PLAYED WAS … The piano. I got a few smiley-face stickers, but my chops and attention (as a five year old) quickly faded. Then it was the violin, which I broke and blamed on the big kid who had been bothering me earlier in the day but was actually innocent. Then I heard my Dad playing snare drum marching music, and it was all over. I was hooked.

5. THE FIRST BAND I WAS EVER IN WAS … Herbal Delights (but we told our parents it was called “Doctor Dance and the Brothers of Boogey”)

Sam Zucchini and the other Zucchini Brothers – Jack and Steve – will slip out of their Clubhouse and head over to The Egg in Albany for their annual kids holiday concert at 2pm on Saturday (December 19).