Odds & Ends At The End Of The Week

What English sounds like to foreigners: from 1972, Adriano Celentano’s “Prisencolinensinainciusol” is sung/rapped in nonsense syllables meant to sound like English. It has a surprisingly modern sound. Here’s a transcript of the lyrics. 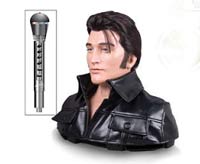 I know, I know. You’ve got a special certain someone on your shopping list, and you’re looking for that perfect gift that says, “Hey, I don’t have a damned clue what to get you.” Well, we would like to suggest maybe a WowWee Elvis Alive Talking Robot with microphone-shaped remote control. Limit 5 per customer. And don’t forget the batteries, either – this sucker requires 8 Ds and 3 AAAs. (Thanks to Paul Rapp for the tip.)

Here’s a WTF of the day – a website that offers, with conspiracy theory awesomeness, absolutely uncontestable proof that Paul McCartney died in 1966 and was replaced with look-alike Phil Ackrill (actually, we’re thinking it’s the website of someone who has a leeetttle too much time on his hands…)

Are you as shocked as I was? Both pictures are straight down the middle; we have equalized the distance between the eyes, and you have already seen that this comparison should be an almost perfectly clean crossfade. But instead, the nose changes in length and width, the chin changes dramatically from an almost perfectly symmetrical one with a cleft straight down the middle, to a very uneven, crooked, and pointy chin with the cleft offset to the left (his right). The second man’s head is taller and thinner that the first. The first man has a very wide, round face, the second has a tall thin face.

Jason Polan is engaged in the project, “Every Person in New York,” in which he is attempting to draw pictures of – you guessed it – every person in New York City. Estimating that the population of NYC is about 8,300,000, Polan has completed about 8,300 drawing so far, a landmark that he celebrated earlier this month by drawing all day at the Museum of Modern Art, Times Square and Grand Central Station.

“I have been working on this project for over one and a half years, almost everyday,” Polan explains, “and I have only completed one tenth of a percent of it.” (Thanks to David Greenberger for the tip.)

Gibson Guitars has released the Dusk Tiger, a self-tuning all-analog guitar. It’s got little motors that tune the guitar for you. It’s got boffo tone control. But most importantly, it matches those tiger print satin sheets you bought to impress that certain someone.

Ticketdisaster.org is a new website dedicated to disseminating information about the proposed merger. Quoting The New Yorker, the site states:

“Ticketmaster is the empire that service fees built: Over the last five years it has generated more than $5 billion in ‘convenience fees,’ ‘order-processing fees’ and newer schemes like charging fans $2.50 to print their own tickets. … [These fees are exorbitant and] often account for more than thirty percent of the cost of a ticket.”

It’s been a while since my college economics courses, but I’m pretty sure that a near-monopoly on ticket sales is not going to lower ticket prices or fees. The merger is anti-competitive, anti-consumer and will only serve to strengthen Ticketmaster’s stranglehold on the live entertainment market.

The site also has a link for you to ask the Department of Justice to block it on anti-trust grounds, and a link to sign up for email updates.

Eileen Ivers, What Was The First Record You Ever Bought?