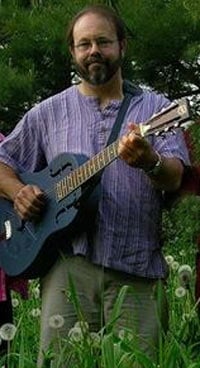 1. THE FIRST ALBUM I EVER BOUGHT WAS … That is hard to remember. I used to go to Harvard Square with my dad was I was very young, get a haircut from Hugo the Italian barber, a hot and a half (hot pastrami) at the Wursthaus, and then buy a record at the Coop. My first record might have been Pete Seeger, but I can’t be sure. I remember horrifying my dad once when I wanted to buy an Elvis Presley record.

2. THE FIRST CONCERT THAT I EVER SAW WAS … The first big impression of a massive concert was when I was 9 years old, living in Rome, Italy, and I saw Pete Seeger. He was amazing, and the Italians ate him up.

3. THE FIRST MUSICAL INSTRUMENT I EVER OWNED OR PLAYED WAS … I played my dad’s baritone uke and learned “Hang Down Your Head, Tom Dooley.”

4. THE FIRST SONG THAT I EVER PERFORMED IN PUBLIC WAS … “The Ants Go Marching One by One” at my parents’ house party.

5. THE FIRST BAND I WAS EVER IN WAS … In junior high school, I was in a rock band called the Lucky Finds.

Jonny Rosen and his bandmates in the exceptionally versatile Annie & the Hedonists take over the stage at Caffe Lena in Saratoga Springs on Saturday night for a very special post-Christmas celebration. Special guest guest Peter Davis will be joining them.