Naturally, December is the month for all kinds of holiday shows throughout Nippertown. Some are huge spectacles like the Trans Siberian Orchestra at the Times Union Center. At the opposite end of the spectrum, you have the Burns Sisters‘ annual holiday show in the intimate and warm confines of Saratoga Springs venerable Caffe Lena.

At the top of the stairs before the show, Marie, Annie and Jeannie Burns were greeting friends and fans with hugs and smiles. Cheryl Jenks (Lena’s new Sunday manager) introduced the band, and the concert slipped into high gear in front of a full house.

Most of the songs were culled from either the Burns Sisters’ “Traditions” (their holiday album released over 10 years ago on Rounder Records) or their most recent release, “Wild Bouquet,” on their own Ithaca Records.

In addition, the lovely trio offered up a few Irish tunes and several other select songs cherry-picked from their decades of performing together, as now and then Marie picked up the mandolin and Jeannie the acoustic guitar.

In the holiday spirit, the sisters also invited Nippertown’s own Nancy Walker and her sometimes singing partner Loni to kick off the second set with a tune. 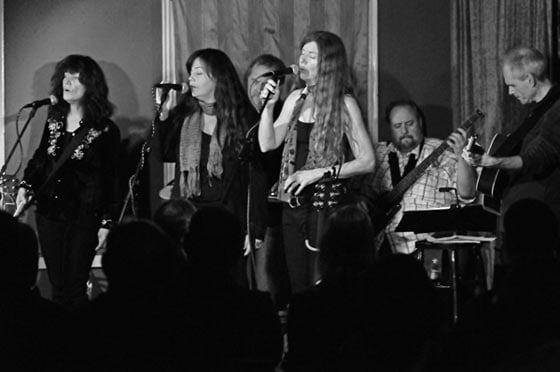