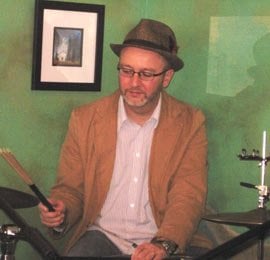 1. THE FIRST ALBUM I EVER BOUGHT WAS … “Some People Can Do What They Like,” by Robert Palmer. I was in a record store with my father, and I saw the album cover – with Robert Palmer and a woman playing strip poker as a taxi waits for them. That was enough to pique my 13-year-old’s interest, and I bought the album. It turned out to be filled with great grooves laid down by the amazing drummer Jeff Porcaro. I still have it. It was a lesson for me that sometimes you can judge an album by its cover.

2. THE FIRST CONCERT THAT I EVER SAW WAS … In the 70’s my friend and I spent the day attending the jazz festival at SPAC. We saw some of the giants in jazz history just before it was too late, including Sonny Payne playing drums with Count Basie, Stan Kenton, Buddy Rich and the Tashiko Akiyoshi-Lew Tabackin Big Band. We were in jazz dork heaven.

3. THE FIRST MUSICAL INSTRUMENT I EVER OWNED OR PLAYED WAS … a silver Ludwig snare drum that I got for Christmas. I stupidly sold it when I was in college.

4. THE FIRST SONG THAT I EVER PERFORMED IN PUBLIC WAS … my best friend and I played dueling drum sets at a talent contest at a shopping mall that was also broadcast on local radio. It was during the “Star Wars” craze so he was “Darth Paradiddle,” and I was “Luke Stickwalker.” We didn’t win the contest, but I am sure we helped save the galaxy.

5. THE FIRST BAND I WAS EVER IN WAS … Just Jazz, with a group of my high school buddies. It was around the time that Wynton Marsalis was becoming famous, and suddenly there was an interest again in bands that played be-bop and wore jackets and ties. We started out with jam sessions in Congress Park in Saratoga and by August were playing six nights a week at Siro’s for race track fans. Might be the best gig I ever had.

Jim Ketterer will be playing with the Arch Stanton Quartet (plus special guests David Cudzilo and Tim Olsen) at the Midtown Tap & Tea Room in Albany on New Year’s Eve (Thursday, December 31). He will also play with Tern Rounders on Saturday (January 2) for the band’s regular first Saturday of the month gig at the Bread & Jam Cafe in Cohoes.

The Nippertown 2009 Year in Music Quiz