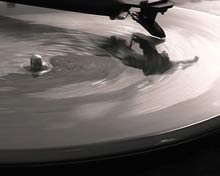 The UN climate summit in Copenhagen has been in the news lately, spawning debate about climate change (from a myriad of self-interest groups, at least) and yielding a watered-down non-binding treaty.

But it did serve to remind us of that in 2007, artist Katie Paterson created Langjökull, Snæfellsjökull, Solheimajökull in which she recorded the sound of three Icelandic glaciers melting and then pressed three records out of ice made from the melted waters. Then she played the ice records until they too melted (it took about 2 hours) and videotaped the results. You can hear an excerpt here.