Lee Musselman @ David Dew Bruner Design, Hudson: Lee Musselman calls his disturbing and surreal assemblages “spirit guides” or “guardian angels.” Formed from doll parts, beads, buttons, wire, farm tools and other found objects, he offered up an army of them in this reprise of his 2008 show that won him the notice of Art in America.

John Foxx’s “The Quiet Man” at BCB Art, Hudson: The former Ultravox frontman offered a magical spoken-word performance of “A Man Made of Shadows” – a section of his ongoing project “The Quiet Man” – to accompany a film collage of cut-up and re-edited vintage black and white films.

George Hofmann @ Martinez Gallery, Troy: Hofman’s large acrylic abstracts of pure color seem to glow from within, so standing in a room full of these paintings felt like floating in a cloud. This small but comprehensive exhibition surveyed his career of more than 50 years.

Lucy Feller’s “Wish You Were Near” @ Ferrin Gallery, Pittsfield: Lucy Feller’s delicate, nostalgic collages of postcards and family photographs displayed in lightboxes combine vintage images with contemporary icons to create an intriguing temporal confusion in the mind of the viewer.

Elizabeth Dubben’s “In the Middle of the World” @ Albany Art Room, Albany: Elizabeth Dubben shuttered the Amrose + Sable Gallery in Albany at the end of May, and then lost no time installing this show at the beginning of June. Sad as we were to see the gallery close, we were oh so glad to see this show of mixed media works that combine oil painting with image transfers of photographs.

Other shows of note:

And sadly, the closing Amrose Sable Gallery in Albany, Digital Artist Space in Troy (they moved to Alabama) and UpsArt Contemporary Gallery in Glens Falls.

And finally, anybody know who’s car this is? We’re in love. 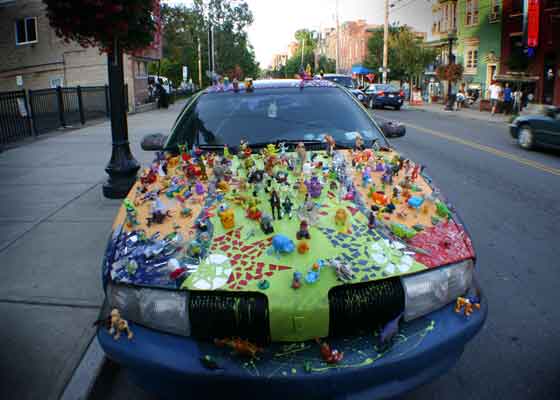 Gregg Allman, What Was the First Album You Ever Bought?