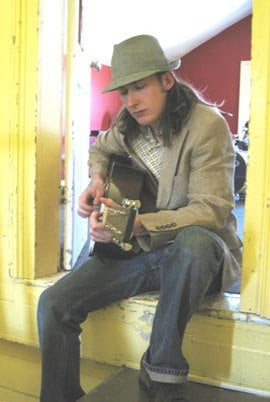 1. THE FIRST ALBUM I EVER BOUGHT WAS … “Resident Alien” by Spacehog

2. THE FIRST CONCERT THAT I EVER SAW WAS … The Mighty Mighty Bosstones at Northern Lights (I was a late bloomer).

3. THE FIRST MUSICAL INSTRUMENT I EVER OWNED OR PLAYED WAS … Piano

4. THE FIRST SONG THAT I EVER PERFORMED IN PUBLIC WAS … An original song (can’t remember the name, but it rocked).

5. THE FIRST BAND I WAS EVER IN WAS … A melodic power-trio called Enigmatic

Railbird‘s Chris Carey spreads his wings and celebrates the release of his debut solo CD “Sunset Moon” with a party and performance at the Bread & Jam Cafe in Cohoes on Saturday (January 9). Accompanying him will ba an all-star band featuring Chris Kyle, Kevin Maul, Tony Markellis and Sam Zucchini. Opening the show will be Sean Rowe.