Five Firsts: Andy Maroney of the Juice Junkees, the Ruddys and Rudeke 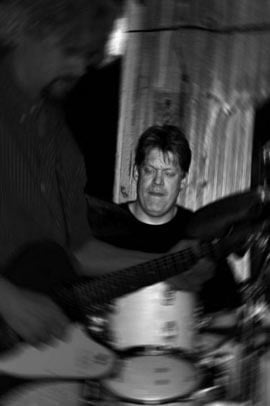 NAME: Andy Maroney
BAND AFFILIATION: The Juice Junkees, The Ruddys, Rudeke (Yes, I play in three bands. Got a problem with that? Wanna fight about it?)
INSTRUMENT: Drums and percussion…especially cowbell

1. THE FIRST ALBUM I EVER BOUGHT WAS … KISS – ALIVE! (1975). This was also the first album I had (temporarily) taken away from me so that my parents could analyze the song titles and decide whether the contents would permanently warp me forever.

2. THE FIRST CONCERT THAT I EVER SAW WAS … CHARLIE DANIELS BAND (1980). My parents had previously taken me to a “performance” by Shaun Cassidy a year or two before that, but I certainly couldn’t call it a real concert. The CDB show was probably the first time I ever SMELLED a concert.

3. THE FIRST MUSICAL INSTRUMENT I EVER OWNED OR PLAYED WAS … I owned a small four-string ukulele but had no idea how to play it. It ended up getting painted silver with Testors model paint so I could pretend I was Ace Frehley. Eventually my inner Pete Townshend took over and it went to ukulele heaven.

4. THE FIRST SONG THAT I EVER PERFORMED IN PUBLIC WAS … The first popular song that I can remember “performing” is “Octopus’ Garden” in 5th or 6th grade choir. I didn’t really sing much…probably just mouthed the words because I was too self-conscious of my voice. Evidently the choir was a pre-requisite to being in the band, where I could play drums, make noise and impress girls…so I thought.

5. THE FIRST BAND I WAS EVER IN WAS … The VERY first was the Pleasant Valley Elementary School Concert Band (4th grade). The first “professional” band I played in was a trio called Second Hand Blues.

Andy Maroney and his bandmates in the Juice Junkees invade Savannah’s in Albany on Friday (January 8) before crossing the Hudson for gig at the Troy Bar in Troy on Saturday (January 9).