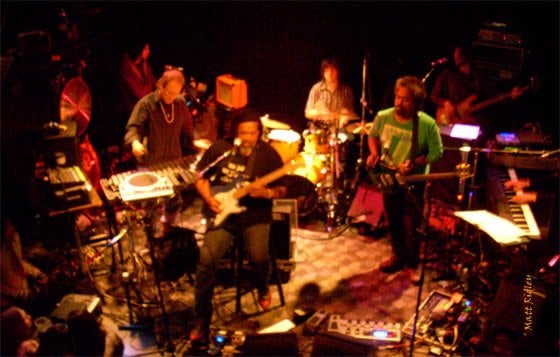 Every time that we’ve seen them, Frank Zappa tribute band Project/Object has always turned in a excellent performance that once again renewed our deep appreciation for the rich and wonderful music of Zappa.

Led by guitarist-bandleader Andre Cholmondeley, Project/Object rolls into Revolution Hall in Troy on Saturday (January 9) in their return to Nippertown, and you can bet that this show is going to be something extra special, as the band will be joined by not one, but two Zappa alumni.

For the first time in 25 years, Ike Willis and Ray White are touring together, as special guests of Project/Object. These two musicians and vocalists were clearly favorites of Zappa’s, as he recorded and toured with one or both of them from 1976 ’til his final tour in 1988. Together, they created some of the most memorable music of Zappa’s vast catalog, and Project/Object will bring them together one more time.

Vocalist-guitarist Ike Willis was with Zappa for more than a decade, making his debut in the title role of Joe on the quintessential Zappa album, “Joe’s Garage.” He toured with Zappa’s band in 1978 and performed on every Zappa tour thereafter.

Vocalist-guitarist Ray White was originally drafted into Zappa’s band in the fall of 1976. He can be heard on such classic Zappa albums as “Zappa in New York,” “Joe’s Garage,” “Tinsel Town Rebellion,” “You Are What You Is” and more. In more recent years, White has also worked with jam-oriented groups like KVHW and Umphrey’s McGee, and has toured with Dweezil Zappa‘s tribute band Zappa Plays Zappa.

Nippertown On the Air