Laurie Anderson, What Was the First Album You Ever Bought? 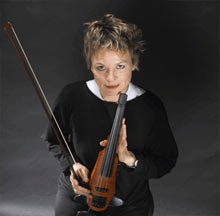 “The first 12-inch record? Well, this is really silly. It was a spoken-word album of letters from the front, from a father to his daughter. Read, just read…letter after letter. It might have been called ‘Letters From Daddy.’ It was really sentimental, but I really loved it.

They were letters from some unspecified front. You never quite knew where this guy was. I don’t know who it was addressed to. Children who missed their dads, I guess. Children who wanted a dad. I had a really nice dad, so I don’t know why I wanted another one on a record.

But I loved that record just because it was so present, and it wasn’t produced at all. You could hear the paper rustling in the background like he was turning the pages of his letters. It was a great record.”

Multi-media performance artist and 21st century storyteller Laurie Anderson sits down with MASS MoCA director Joe Thompson for a conversation at 4pm on Saturday (January 16) at MASS MoCA’s Hunter Center (where she is in residence developing “Delusion,” a series of short mystery plays that will premiere at the Vancouver Cultural Olympiad next month.