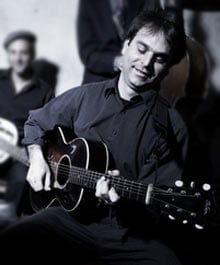 1. THE FIRST ALBUM I EVER BOUGHT WAS … The Cars’ “Greatest Hits”

2. THE FIRST CONCERT THAT I EVER SAW WAS … The Oak Ridge Boys (not my choice – my parents took me when I was 8)

3. THE FIRST MUSICAL INSTRUMENT I EVER OWNED OR PLAYED WAS … a crappy student model Baldwin piano

4. THE FIRST SONG THAT I EVER PERFORMED IN PUBLIC WAS … probably a Grateful Dead tune with my high school band

5. THE FIRST BAND I WAS EVER IN WAS … that obscure high school band was named – very strangely – Ly Forbes (don’t ask, there’s no answer)

Parrish Ellis and his bandmates in the Wiyos ramble into The Linda in Albany on Saturday, January 16 in support of their latest album, “Broken Land Bell.”