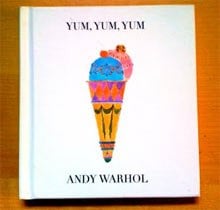 Curious Pages: Recommended Inapproriate Books for Kids is a website with scans and commentary about strange, offbeat and surreal children’s books, including early Dr. Seuss, composer John Cage (what?) and Andy Warhol. Here are just some of the titles:

Dolly Freed grew up off-the-grid, sharing a home with her alcoholic father and home-schooling herself. When she was eighteen, she wrote Possum Living: How To Live Well Without A Job And With Almost No Money, a book that detailed her her frugal-living experiences. Then she went to college and later got a job at NASA as an aerospace engineer. And then she dropped out of the rat-race again.

Finding Dolly Freed, an essay by Paige Williams, is a fascinating read.

Zebra finches playing the electric guitar (and hey, they play better than I do!) in French artist Céleste Boursier-Mougenot’s new commission for The Curve in London.

“For his installation in The Curve, Boursier-Mougenot creates a walk-though aviary for a flock of zebra finches, furnished with electric guitars and other musical instruments. As the birds go about their routine activities, perching on or feeding from the various pieces of equipment, they create a captivating, live soundscape.”

STRANGER AND STRANGER: Shock rocker-filmmaker Rob Zombie is about to dip his toes into a new and rather unlikely realm – mainstream network television. Zombie is making his television directorial debut with an episode of “CSI: Miami” that is slated to be broadcast at 10pm Monday, March 1 on CBS-TV.

“As writers, we were really pushing to create an interesting backdrop that could lend to Rob Zombie’s visual style,” says Marc Dube, co-executive producer of the show. “We thought opening the episode at a macabre party with Miami attendees all wearing stylized masks (a la “Eyes Wide Shut”) would be a fun kick-off point for Rob do to what he does best – conveying the cruel and creepy underbelly of humanity.”

“I am very excited to be working on a show that has such an intense and unique visual angle on the classic crime drama formula and look forward to putting my own bizarre stamp on the world of ‘CSI: Miami,'” says Zombie.

Here’s a guy singledhandedly performing a (multitracked) version of Muse’s Knights Of Cydonia
acapella (Glee, Sing-Off)
lucky thing he’s got Final Cut Pro to put it all together.