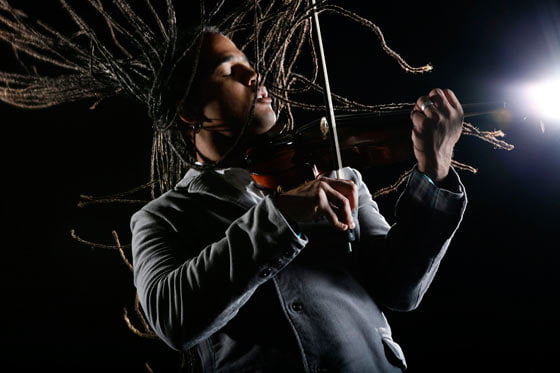 DBR & The Mission at The Egg in Albany at 8pm Friday (January 22) will serve as a fund raiser for Haitian earthquake relief efforts.

Haitian-American bandleader Daniel Bernard Roumain has joined forces with The Egg to direct profits from the performance to the William J. Clinton Foundation, which has organized a major relief and recovery effort in Haiti.

“At this moment, in this desperate hour, I am overwhelmed with grief for all of those lost, suffering and struggling with the realities of this deepening disaster. I’m not at all certain what my response should be, and I’m gripped by a feeling of helplessness,” said composer-violinist Roumain. “I am determined to do all that I can for my Haitian brothers and sisters, and I’m grateful that the Albany community is joining me in this journey of hope towards Haiti’s recovery and rebirth.

“This concert is a march towards the reconstruction and resurrection of that island-nation, one that has given me so much while never asking for anything in return. We will rebuild, we must rebuild, and in doing so, we begin the process of helping and healing those who now need us the most. Nothing is as powerful as the will of a nation to survive, the strength of people to believe, and the miracle of the individual boldly acting towards world-wide change.”

Peter Lesser, the director of The Egg said, “We are pleased to work with Daniel to support the worldwide effort to provide support to the millions of people that are suffering as a result of this tragic event. This will offer Capital Region residents an opportunity to contribute to the relief effort while experiencing some very exciting, innovative music.

“A minimum of one-half of box office sales will be donated to the Haitian relief effort,” Lesser added. “And once our other obligations are met, any balance will be added to our contribution.”