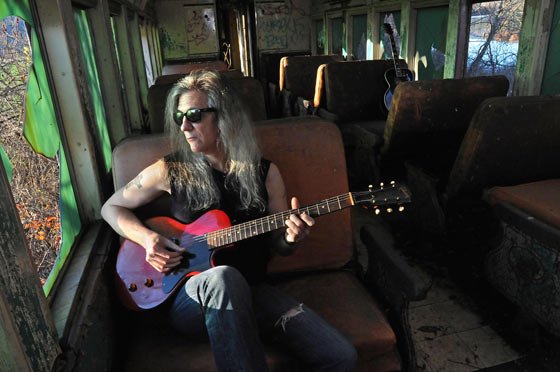 1. THE FIRST ALBUM I EVER BOUGHT WAS … the Beach Boys’ “Today!” was the first LP, a handful of singles by the Beatles before that.

2. THE FIRST CONCERT THAT I EVER SAW WAS … the Jeff Beck Group – Jeff Beck, Rod Stewart, Ron Wood, Nicky Hopkins and Mickey Waller – at the Aerodrome in Schenectady. Beyond hearing and seeing a guitar master and fiery band, it was my first taste of British Blues, and I was hooked.

3. THE FIRST MUSICAL INSTRUMENT I EVER OWNED OR PLAYED WAS … a Gibson B-25 acoustic. Soon followed by a Sears Silvertone electric, eventually replaced by a Les Paul. Many Les Pauls. (that’s a 1960 Les Paul Junior in the photo)

4. THE FIRST SONG THAT I EVER PERFORMED IN PUBLIC WAS … “Secret Agent Man” by Johnny Rivers

5. THE FIRST BAND I WAS EVER IN WAS … Too many too mention or remember early on. But at 19, my first full-time/professional band was called Dangerfish.

After years of playing guitar in bands, David Malachowski has finally stepped out to record his own solo CD, “The Secret Life of Colonel David.” He’s also leading his own band, too, David Malachowski & the Woodstock Allstars, who will make their Albany debut at The Linda on Friday (January 22).

Memories Of The QE2 – Now Just A Memory