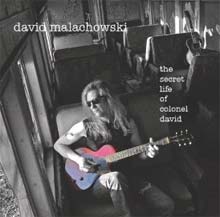 Woodstock’s David Malachowski is a guitarslinger.

He’s also served as musical director, guitarist and actor in a number of productions at Albany’s Capital Repertory Theatre, including the ever-popular “Always…Patsy Cline,” “Hank Williams: Lost Highway” and “It Ain’t Nothing But the Blues.”

And lately, he’s also been heading up another supergroup musical aggregation, the Woodstock AllStars. He’ll be leading them into The Linda in Albany on Friday (January 22) and the Iridium in Manhattan on Wednesday (January 27). The band includes drummer Gary Burke, bassist Graham Maby, organist Pete Levin, vocalist Machan Taylor, pianist Daniel A. Weiss, harmonicat Dennis Gruenling and saxman Erik Lawrence.

But one thing that Malachowski hasn’t done during his illustrious musical career is to make a record of his own. Until now.

In December, he entered Kevin Bartlett‘s Aural Gratification Studios in Woodstock and emerged five days later with the knockout, five-song EP, “The Secret Life of Colonel David.” Unlike his past musical projects where he’s always played the role of the hot-shot guitar sidekick, this time around, Malachowski has finally put himself squarely in the spotlight.

Not only did he write four of the CD’s five songs, but he also played all of the instruments (bass, piano, organ, mellotron, mandolin, drums and, of course, guitars), sang all of the vocal parts, handled the production chores and even designed the CD package.

“It just happened that way,” he says. “The music is inherently simple, basic country blues with a few embellishments, some new tricks and twists, and lots of backwards masking.”

Indeed, while the music is rooted in “basic country blues,” nobody’s gonna mistake this for a Doc Watson album. Malachowski brings his rock guitar chops with full force.

The opening “Jump Up” is an ecstatic love song with the refrain, “My baby makes me wanna jump up and never come down.” But rather than kicking the song into an uptempo joyous celebration, Malachowski spins it around 180 degrees, playing it slinky and perfectly understated.

“Day Is Done” is an intimate, folk-rooted minor-key ballad, while on “I’m Goin’ Down to Newberg,” Malachowski runs his vocals through a filter that adds an ominous, ghostly detachment to the song, transforming what could have been nothing more than a standard blues into something truly intoxicating.

The bouncy, twang-fueled instrumental “New Circle Ride” showcases his considerable guitar talents without ever falling into the hey-look-at-me-play trap that so many guitar heroes resort to when they step into the spotlight.

The 23-minute disc wraps up with Malachowski’s interpretation of Robert Johnson’s classic “Crossroads.” Again, he sidesteps expectations, and rather than blowing out the song with a fantic, over-the-top approach, he works his way through it at a casual ramblin’ tempo, focusing on the groove more than the guitar pyrotechnics.

Ultimately, that’s exactly what makes this CD so special. It’s rich in mood, atmosphere and grooves, and Malachowski has such taste and confidence that he doesn’t need to rely on guitar histronics to get his music across.

David Malachowski and the Woodstock AllStars play at The Linda in Albany on Friday (January 22) and at the Iridium in New York City on Wednesday (January 27).