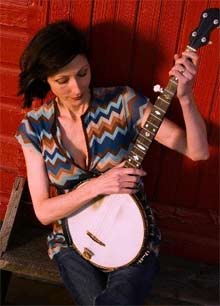 1. THE FIRST ALBUM I EVER BOUGHT WAS … either the Beatles’ “White Album” or Steve Martin’s “Let’s Get Small” – can’t remember which. When I first discovered the Beatles, I had no idea that the band hadn’t been together for years. My sister eventually broke the news, and I think I wept for days. And Steve Martin, well, I could recite his albums from beginning to end and did so often – much to my family’s dismay. Years later when I finally sold my record collection, the only ones I couldn’t bear to part with were the albums by the Beatles and Steve Martin. Still have them to this day.

2. THE FIRST CONCERT THAT I EVER SAW WAS … a summer jazz festival with my dad in Oregon, which is where I grew up. I was dazzled by the energy and the way the musicians all seemed to communicate without talking, like they were all in on some hilarious joke. It was joyful, spontaneous and there was a crackle in the air. I had to hold my breath, I was so excited!

3. THE FIRST MUSICAL INSTRUMENT I EVER OWNED OR PLAYED WAS … a piano. Our neighbors had one and I couldn’t keep my little fingers off of it, picking out tunes by ear. My parents noticed so they went out and found an old upright for $25 dollars. It had about a zillion coats of white paint on it (which my mother painstakingly removed) but all of the keys worked, and I was smitten.

4. THE FIRST SONG THAT I EVER PERFORMED IN PUBLIC WAS … a simple version of “900 Miles,” the old Appalachian folk song. It was in fifth grade, I think, at some kind of a school assembly. I can’t remember who taught me the song – perhaps my grandmother – but it seems like I’ve always known it. I stood up and sang it a cappella, and there was this huge pause when I finished, followed by an eruption of hoots and hollers and mighty applause. I was hooked.

5. THE FIRST BAND I WAS EVER IN WAS … the alt-country rock band Little Green. We played all the best NYC dives in the mid-1990’s, and my job as sideman was banjo, mandolin, guitar, back-up vocals and eye candy.