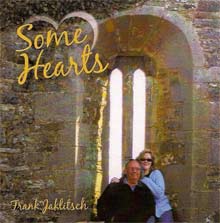 Frank Jaklitsch is quite simply one of the most tireless and generous musicians on the Nippertown music scene. He’s back with his 13th album – that’s right, 13 – in 15 years, and it’s his best yet.

He cuts a wide swath with his song selection, from the pure pop of the Marshall Crenshaw title track to Tommy Sands’ Irish anthem “Your Daughters and Your Sons,” from Mary Chapin Carpenter’s poignant “This Shirt” to the inspiring Poco tune “Follow Your Dreams.”

Jaklitsch is backed up by local Celtic band the Fighting 86’s on a handful of these 16 tunes – Jaklitsch originals “Hope Lives” and “Penny Girl,” as well as the rousing traditional gospel blues “John the Revelator” and Luka Bloom’s “Hudson Lady” – and the 86’s fiddler Mark Frederick makes outstanding contributions throughout the disc.

Produced by Ted Malia, the album also features a number of other guest musicians, including Bob Long, Steve Herubin, Bill Flynn, Bob Meyer, Keith Barney and Evan Conway, most of whom can be found frequently sitting in with Jaklitsch at his regular pub gigs at such venues as McIntyre’s in Watervliet, Nottingham Chop House in Colonie, the Irish Mist in Troy and the Hibernian Hall in Albany.

Jaklitsch, of course, is a master interpreter of other people’s songs, but the best thing about “Some Hearts” is that he’s coming into his own as a songwriter, too. And while Jaklitsch’s vocal passion and power is front and center, his original fingerpicking instrumental “Jesus at Sunrise,” showcases his often overlooked guitar skills.

Like all of Jaklitsch’s music, “Some Hearts” comes at you straight from the heart, and you can’t ask for more than that. All proceeds from the sale of “Some Hearts” will be donated to local charities.

Frank Jaklitsch & Friends headline “Cohoes Fest: A Cultural Variety Show” at the Cohoes Music Hall at 7pm Friday (January 29). Also featuring the Spendwood School of Dance, the Boland School of Irish Dance and others, the performance is a benefit for the Vineyard Community Church in Cohoes. Admission is $10; seniors free.

Flashback: It’s the 20th Anniversary of the Knickerbocker Arena