Flashback: It’s the 20th Anniversary of the Knickerbocker Arena 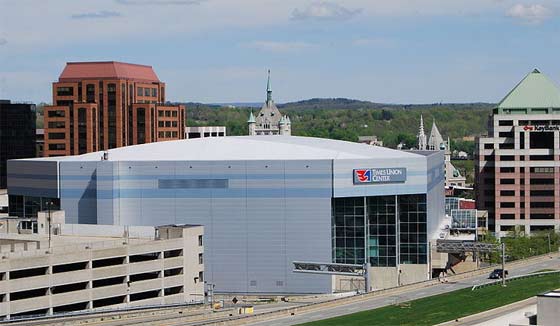 Yes, Saturday (January 30) marks the 20th anniversary of the opening of the Knickerbocker Arena in Albany (now known as the Times Union Center).

As most of you old-timers will certainly remember, the arena was launched with a gala grand opening celebration – complete with a sold-out crowd dressed to the nines in tuxedos and evening gowns, the kind of thing you just won’t find at the Times Union Center – and a concert by Frank Sinatra.

Backed by a swinging orchestra conducted by his son Frank Jr., Old Blue Eyes belted out his signature tunes – “My Way,” “New York, New York” and “Strangers in the Night” – as well as “The Lady Is a Tramp,” “Come Fly With Me” and “For Once in My Life” and “(I’ve Got You) Under My Skin.”

But it was his masterfully melancholy rendition of “One for My Baby” that was the concert’s highwater mark. The ultimate bar-room ballad by the world’s finest saloon singer. Even at the age of 74, that performance proved that Sinatra still had the right stuff.

(photo of the Times Union Center by UpstateNYer, used under a Creative Commons license.)