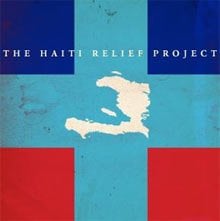 The Dave Matthews Band today released “The Haiti Relief Project” EP, the proceeds of which will benefit the Bama Works Haiti Relief Fund.

The digital EP features five previously unreleased live tracks, including “Lying in the Hands of God,” which was recorded in concert at the Saratoga Performing Arts Center on June 12, 2009.

Also featured on the EP are a solo version of “Butterfly”; a 2004 recording of “Cry Freedom,” featuring the band’s late saxophonist LeRoi Moore; and two more tracks recorded during last year’s summer tour – “Out of My Hands” and “Dive In.”

The EP is now available for download for $5 at DMBLive.com.

Award-winning designer Adam Larson created the cover artwork for the EP, which also appears on the limited-edition “The Haiti Relief Project” t-shirt. Proceeds from the t-shirt sales will also benefit the Bama Works Haiti Relief Fund.

And for today only, all proceeds from other merchandise sales (excluding music and video, with the exception of “The Haiti Relief Project” download) made in the Warehouse and the band’s official online store will also go to the Relief Fund.

The Dave Matthews Band is scheduled to return to the Saratoga Performing Arts Center on Friday and Saturday, June 4-5.