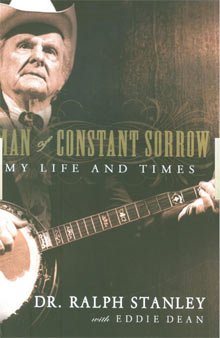 Over 65 years of playing music, Ralph Stanley has risen through the ranks of old time music and now, quite deservedly, serves as its eldest statesman with a Biblical Authority attributed to him by his many fans and admirers.

He was always well known in the old time and bluegrass community, where he had already been conferred first name status and was simply referred to as “Ralph” – others who achieved this exaulted status were “Earl” (Earl Scruggs) and “Bill” (Bill Monroe). The unexpected success of the movie “O Brother, Where Art Thou?,” featuring his a cappella rendition of the traditional “O Death,” finally exposed him to a world wide audience at the age of 75.

This book, written with music journalist Eddie Dean, is Ralph’s narration of his life presented in his “plain old words” rather than “correct and proper English.” This conceit seems artificial at first, but as the pages go by the reader gets used to it. And in most cases, it fits the story being told. It’s the whole story, from his immediate ancestors up to the present time with lots of great details, stories and people. And what a great story it is.

Ralph and his older brother Carter Stanley grew up in the mountains of southwestern Virginia and never strayed far from there or the music that he first learned. His first music experience as a young boy was “lining out” a song (singing a verse for the congregation to repeat) in the austere Primitive Baptist Church that his family attended. There were no musical instruments allowed, the church practices were strict and the hymns were all business. Like in so many other facets of American music, he and Carter carried this into the music they created and performed.

As an alternative to working in the coal mines or lumber mills, Ralph and Carter decided to try to make a living playing music. After playing with Bill Monroe they set off to form their own band, the Stanley Brothers. Guitarist Carter was affable, a good talker, the lead singer and the focus of the band. Banjo player Ralph, was quiet and “backward,” always in the shadow of Carter.

Starting in the late ’40s, they began a routine of playing “The Farm and Fun Time Radio Show” on WCBY every day at noon and then driving to personal appearances later in the day that they booked (mainly through the mail) within the radio station broadcast range. These gigs were not glamorous – auctions, schools, lodge meetings, store openings – and they approached them like work, driving back and forth every day to do the radio show. They were not paid for the radio show but didn’t complain due to the exposure and personal appearances they got from it and the chance to sell their records and song books.

At that time, the recording process was simply the band playing live into a microphone and cutting a 78 rpm acetate master. They prided themselves on being able to get a song down in one take and not wasting master disks. The same when they later recorded their 33 rpm albums. Even now, Stanley disdains modern recording techniques and thinks if a band can’t play it correctly live then they just aren’t any good.

The band recorded dozens of albums of old time songs and rarely spent more than a day or two recording. They were satisfied with the result and needed the time to play their personal appearances. These unpolished and essential recordings hold up well today.

Now talk about paying dues, The Stanley Brothers ground out a living doing this for over 20 years. Driving endlessly in a car with five or six men crammed in, bass fiddle tied to the top, trunk full of instruments, luggage and merchandise.

Along the way there were lots of changes in band members, an unsuccessful marriage for Ralph (which is described and dismissed in about two sentences – which leaves the reader wondering), the rise of rock & roll and rockabilly which nearly put them out of business, brief stints of trying to leave the business and work in auto factories in Detroit, the folk revival which favored the homogenized and pasteurized versions of the very material they preserved, and Carter developing an increasing drinking problem which led to his death in 1966.

Now let’s stop a minute here – 20 years of full retail price dues, scores of albums, hundreds of thousands of miles, a brother cut down, no prosperity to show for it, no ability to do anything else and Ralph Stanley, the “little brother,” the “other brother,” the “backward brother” is now the band leader.

After overcoming great personal doubt, he found a replacement for Carter and carried on. The popularity of bluegrass and newgrass in the seventies and the surge in summer festivals finally gave Ralph a more stable foundation for his music and he continued to grind it out for another 35 years until his final big exposure in “O Brother.”

Ralph Stanley describes his music as old time mountain music rather than bluegrass. His music is based around the singing and the stories of the songs. There isn’t show-off hot picking and extended breaks. He has stayed totally true to the old-time style and sentiments that he first started with.

In many of these songs people kill each other, drink unwisely, disappoint their family, make bad choices, leave the country and get corrupted by the city, go to jail and quite often hope for redemption and forgiveness from the Lord which is seen as quite likely with proper repentance.

While others have moved the music forward, Ralph has remained like a rock, unmoving and true to his earliest roots. He still lives walking distance from the little farm house he grew up in. He now stands like Moses with the tablets of his tradition carved in stone for posterity.

Ralph always looked at playing music as a job and as such did not often participate in pickin’ parties and jam sessions that are so popular with string band players.

He didn’t like the hippies of the ’70s who took up and evolved the old-time/bluegrass styles and, quite unfairly, he disparages them for not being able to play the old-time way and thus needing to adapt the music. Having been involved with the ’70s festival scene, I know these players cherished the old-time music, but they were doing what all great players do, which is carry it onward and upward to create their own genre. However, I don’t think that Sam Bush, Bela Fleck and Jerry Douglas will take any offense.

Ralph takes his late-in-life fame from “O Brother” in stride, but he wouldn’t have minded it coming a little earlier. He remains solidly fixed to his traditions and isn’t about to change a thing.

One disappointing aspect of this book, however, is the complete lack of photographs. There is an unannotated collage on the inside of the book jacket, but it would have been more satisfying to have pictures of the many people that were referred to and described in the book. Points off for that omission. While we’re at it, an index would also be nice, but that omission is forgivable.

For fans of Ralph Stanley and his music, this book will provide a rich and detailed look at his origins and career, which parallels so many other old-time and bluegrass musicians that came up at that same time.

Let’s just say it’s a must-read. His insights into rural life in the mountains of Virginia are sobering and manage to vividly capture a time and traditions that have all but disappeared, but whose essence is preserved in the music that Ralph is passing on to all of us for safe-keeping.

Review by Paul Jossman, aka Bowtie

Will the Real Bob Marley Please Get Up, Stand Up?