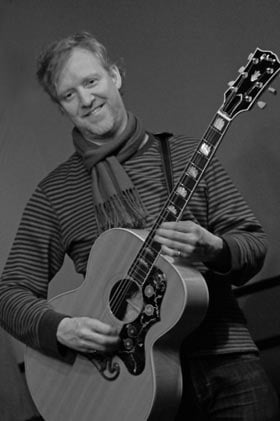 Last Saturday night Chris Barron, the lead singer of the Grammy-nominated, gold and platinum-selling Spin Doctors, rolled into Schenectady with his stripped-down acoustic duo show. It was his third area appearance in less than a year, and his second in front of a sold-out house in the Van Dyck.

Accompanied by Jon Loyd on keyboards, Barron served up an impassioned night of catchy original songs that were beautifully crafted, revealing multiple layers of emotional lyricism. Most came from his newest independent release “Pancho and the Kid,” but there were a couple of older ones pulled from his earlier solo outing, “Shag.”

With his latest release, the man who penned two of the three Spin Doctors’ Billboard-charting hits (“Little Miss Can’t Be Wrong” and “Two Princes”) proved that he has evolved into a first-rate songwriter/composer complete with charts that employed violins, mandolins, a cello and an entire choir of singers.

On Saturday evening, he took the audience on a journey through the entire emotional spectrum from heartache to hope to happiness – better known to most of us as romantic love. And it was intriguing to hear how much Barron has evolved as an artist from the days when his pockets were filled with Kryptonite and his face graced the cover of Rolling Stone magazine.

Review and photos by Andrzej Pilarczyk