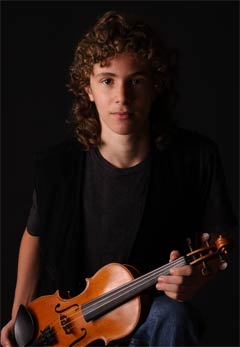 NAME: Jonathan Russell
BAND AFFILIATION: Several bands including the Hot Club of the Lower East Side, but this weekend I’ll be playing with the Doc Scanlon Trio in Saratoga
INSTRUMENT: Violin

2. THE FIRST CONCERT THAT I EVER SAW WAS … My mom says that the first concert I ever went to was one of hers when I was six weeks old. I don’t remember it. The first one that I remember was a klezmer band playing at a library near me.

3. THE FIRST MUSICAL INSTRUMENT I EVER OWNED OR PLAYED WAS … The first instrument I ever played was the violin.

4. THE FIRST SONG THAT I EVER PERFORMED IN PUBLIC WAS … The first song I ever performed in public was just five notes on an open string when I was three years old, and I didn’t want to go off the stage. My parents plan to show this to any girl I try to date.

5. THE FIRST BAND I WAS EVER IN WAS … The first band I ever played with was Ev Dulet and the Dixie Devils. I wanted to form a jazz band called Jonathan’s Jurassic Jammers, but it seems most jazz musicians don’t like to be called dinosaurs.

ArtBeat: Tricks of the Trade