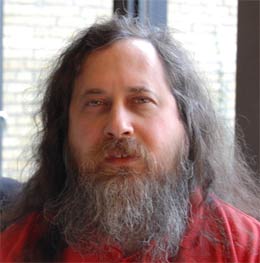 On Friday afternoon, the University at Albany’s College of Computing & Information hosted a talk by renowned software developer and software freedom activist Richard Stallman, who discussed the Free Software Movement and the GNU/Linux Operating System.

Mr. Richard Stallman arrived a half-hour late, entered from the back of the hall, walked up on the stage with several bags, his coat and such and laid his things on and about the stage. He immediately started looking around the podium and stage for a plug where he could get “electric current” and questioned the audience if they could help as he searched.

He complained that the stage lights were too bright, requesting that they be turned down and the house lights brought up. Next to the podium was a table with six bottles of water and two sodas. He commented that he could not drink the Dansai bottled water that was provided, as it was a Coca Cola product, and the company was responsible for “killing union organizers in South America.” He outlined some other sins committed by the Coca Cola company.

By now, a representative of the college was also onstage, actively searching for “electric current” and removing the offending water – but leaving two large bottles of Pepsi. Mr. Stallman remarked that he is a tee-totaler. He likes a lot of liquid and never gets enough.

The audience at the Performing Arts Center’s Recital Hall consisted of about 150 people: approximately 145 men and five women. It was a software developer crowd to be sure, and with his long hair, beard and very ample gut barely covered by a shirt that was several sizes too small, Mr. Stallman fit right in.

Eventually, the commotion onstage settled down. Different, non-Coca Cola water was provided. The lights were adjusted. The use of the microphone was determined (not needed). And everyone prepared for the talk to finally start. Then Mr. Stallman asked where the rest room was and abruptly left the stage for several minutes … the audience still patiently waiting.

Some professors obviously intended to say some words by way of introducing Mr. Stallman, but upon his return to the stage he immediately launched into his talk. After about a minute, however, he was interrupted when it was discovered that the video camera wasn’t running. He offered to start over, but after a not-too-brief exchange, it was determined he would continue.

Then the aforementioned professors took the stage to introduce him. First,t he Department Chairman spoke briefly, introducing a professor who was to introduce Mr. Stallman. The professor got up and said, “Richard Stallman needs no introduction”.

A pot of hot tea was brought out.

Richard Stallman is an iconic figure in the software development community and its most ardent software freedom activist. In 1984, just a few years out of Harvard, he founded the Free Software Movement. He is intelligent, passionate, eloquent and an extremely engaging speaker – which made the pre-show falderal all the better and endearing.

The basis of Stallman’s Free Software Movement is:

All of these freedoms are violated by every well-known software application, and Mr. Stallman sees this as detrimental to society – imposing on our personal freedom, rights and privacy. Interested persons are encouraged to Google him for more details. There is too much to cover here.

Like all true believers, his message is simple, well-formulated, delivered with total conviction, seductive and a wonderful ideal. He keeps the fire alive for personal freedom and privacy, which is constantly eroded by technology.

Review by Paul Jossman, aka Bowtie