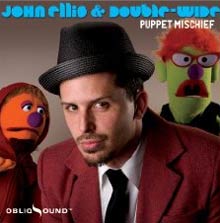 Saxman John Ellis is probably best known for his nearly six-year stint with guitarist Charlie Hunter. Last summer, Ellis commanded my attention when I saw him play with Texas jazz vocalist Kat Edmonson at the Tanglewood Jazz Weekend. But Double-Wide is a different animal altogether, not particularly akin to either of those projects.

The sound of New Orleans seeps deep into these nine tunes, all penned by Ellis. In part, it’s because of Marsalis’ distinctive drumming (and he is, after all, a member of New Orleans First Family of Jazz). It’s part because Perrine’s oh-so-funky sousaphone provides the quartet with a brass band foundation and flair. And it’s part because the album has an undeniable Crescent City joie de vivre.

“It’s hard to say those two words next to each other and not smile,” Ellis says of the album title. And indeed, when asked about the album’s inspirations, Ellis rattles off “carnivals, state fairs, children laughing, clowns and dancing.”

Double-Wide is like a syncopated circus band – sharp and versatile, but just a bit woozy. It’s the Man on the Flying Trapeze. It’s Mardi Gras madness. It’s Fellini and a bottle of red wine.

John Ellis & Double-Wide make a tour stop at Red Square in Albany at 9pm on Thursday (March 4). Tickets are $12.