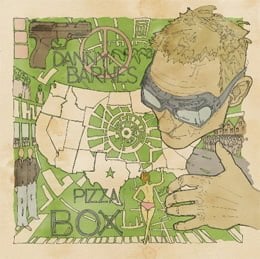 Full disclosure: I first fell in love with Danny Barnes‘ music years ago at the long-defunct Pauly’s Hotel when he was tearing up Metallica covers on clawhammer banjo.

That was back when he was leading his neo-old-timey band the Bad Livers (still one of the all-time great band names).

With his brand new album, Barnes is still rooted in the Americana trenches, but he fearlessly mashes up his roots sound with, well, whaddaya got?

In the clattering “Misty Swan,” he dives into a banjo-scat singing duet with himself. On “TSA,” his fragile, frailing banjo is bolstered by the big, fat, backbeat wallop of drummer Matt Chamberlain. And the stomping funk of “Bone” features an off-beat rap interlude, a flaring horn section and another scat-banjo duet that flies off into the fifth dimension.

And the rest of the album is just as good.

Eclectic ain’t the word for this. In fact, I don’t think there is a word for this music. But it is mighty, mighty fine.

SECOND OPINION:
“Danny Barnes’ ‘Pizza Box’ is my favorite new music, my favorite rock record, and my favorite country record. From the first time he sat down and played me ‘Road,’ I knew his next record was going to be great, but I didn’t expect this. The music is smart and soulful, and the lyrics are profound. It is heaven and earth. It is Americana, from the back porch to the pulpit, shattered dreams on angels wings. I can’t stop listening. In the haze of over produced, ‘perfect’ recordings, Danny Barnes spent less than two weeks banging out an album that may well save your soul.” – Dave Matthews

Danny Barnes rides into Revolution Hall in Troy on Friday night. He’s opening for Phish’s Mike Gordon. Unfortunately, the show is sold out, so hope for a miracle ticket. And if you’re lucky enough to already have a ticket, well, be sure to get there early. You don’t want to miss Danny Barnes.

Five Firsts: Vincent Lane of What She Said

Song of the Week: The Waters of March