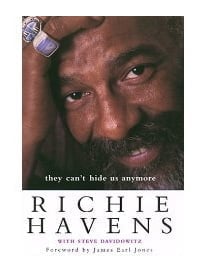 The opening of Richie Havens’ autobiography, “They Can’t Hide Us Anymore” (Avon Books, 1999):

I was in New York City and I could feel the swell of energy 100 miles away. Nobody seemed to care that the Woodstock Festival was no longer going to take place anywhere near Woodstock. The only thing that mattered was that it was going to happen. Today.

I left the city at five-thirty in the morning on the day I supposed to play – the first day – and drove straight to the Howard Johnson Hotel in White Lake, New York, without a hitch. We were only a few miles away from the farm and all the bands had been told to come there first.

I was lucky to get up the road so smoothly. By seven-thirty in the morning, I was sitting in the lobby with my band. I wasn’t worried. I was fifth in the order and wasn’t scheduled to go on for hours. But at two in the afternoon, I was half-asleep when news came that there was no music; still no way to get through.

From the edge of the hotel parking lot I could see traffic stopped cold on the approach road. I could tell right there that the crowd was much larger than anyone was saying…”

Richie Havens will perform at the Eighth Step @ Proctors in Schenectady at 7:30pm on Saturday. Mustard’s Retreat opens the show. Tix are $28, $35.

CD: Michael Eck’s “In My Shoes”