CD: Michael Eck’s “In My Shoes” 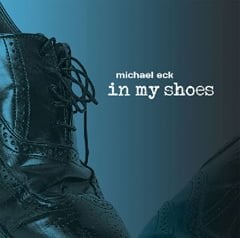 Before he began banging around Nippertown with such bands as the Lost Radio Rounders and Ramblin Jug Stompers, singer-songwriter Michael Eck was a solo man-with-a-guitar-about-town, pumping out what he likes to describe as “maximum solo acoustic.”

But it’s been a full decade since the release of his last solo album, 2000’s “Small Town Blues” on the Dancing Druid Music label.

He comes roaring back with the new “In My Shoes,” a snappy collection of 11 original songs and a well-chosen cover of “Beyond the Blues” penned by the triumvirate of Peter Case, Bob Neuwirth and Tom Russell.

“A few years back,” Eck writes in the liner notes of the new CD, “before he grudgingly moved to Texas, my brother urged me to make a record that sounded like I do onstage, alone. It took a long time. This is that record – it’s ‘A Letter to Dave.'” NOTE: That’s a reference to “A Letter To Mike,” Hamell on Trial’s 1992 album, which was dedicated to Eck when he was living in Texas.

Recorded in a flash on a shoestring budget at the WEXT-FM studios by Chris Wienk, this album is Eck unadorned – just the man, a guitar and his mountain of a voice.

The CD cracks open with a steamroller. Eck chugs through “The Gossip Train” like a man in hurry to make up for lost time. Big, bold Leadbelly-like guitar riffage pushes the song, while Eck chews up the lyrics and spits them out with all of the appropriate intensity and urgency that the song demands. And it all clocks in at under two minutes.

Which kind of sums up the whole album. Even the ballads – like “You’re a Mountain” and “Spent the Day” – are charged with insistence. And when he turns up the tempo to tear through ravers like the blues-tinged “The Devil to Pay” or the old-time country-flavored “A Month of Crows,” well, hold onto your hat.

Eck isn’t wasting his time anymore, and he’s not wasting yours, either, charging through a dozen tunes in less than 29 minutes. No frills, no filler, no nonsense. This is meat ‘n’ potatoes music, hearty and life-sustaining.