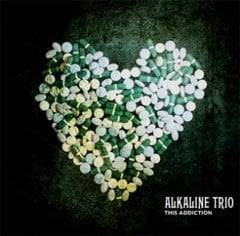 Chicago punksters Alkaline Trio have been banging around since 1997, although the current line-up (guitarist Matt Skiba, bassist Dan Andriano and drummer Derek Grant) has only been in place since 2003’s “Good Mourning” album.

Since then they racked up some major-label success (2008’s “Agony & Irony”), but now they’ve returned to indie status with a new album that balances a bit of the old spit ‘n’ fire of their punkier early discs with their more recent polished, punk-pop sound.

The album abounds with plenty of hooks, rousing sing-along choruses and chiming guitars – just the kind of thing to appeal to Green Day fans.

There’s nothing even vaguely groundbreaking here, but all 11 songs are solid and chugging. And there are just enough surprises – would you believe a trumpet solo in the middle of “Lead Poisoning”? – to keep the listener intrigued.

Alkaline Trio charges into Northern Lights in Clifton Park tonight. The show kicks off at 7:30pm with Cursive and the Dear and Departed. Tix are $20.

George Millar, What Was the First Album You Ever Bought?