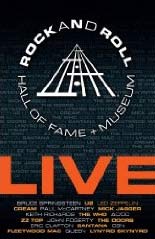 Personally, we think the idea of the Rock and Roll Hall of Fame is ridiculous. Rock and roll ain’t baseball, boys and girls. You can’t boil it down to statistics. It ain’t all about the hits.

Or at least, it shouldn’t be. I mean, really, if there were even a smidge of justice in the world, NRBQ would have been inducted years ago, right? Lenny Kaye? Don’t get me started…

But with this year’s induction ceremony looming on Monday night, we decided to take a look back at the Hall of Fame’s 25-year history, as encapsulated on the 9-DVD box set, “Rock and Roll Hall of Fame Live,” from Time Life Entertainment. There’s also a more general-consumer-friendly 3-DVD version, as well as an obsessive-only 14-DVD-and-book set (which still doesn’t include any of the omitted performances that are noted later in this story). We decided to take the middle ground.

Yeah, at nine DVDs, it’s pretty massive – 125 performances, as well as induction speeches, acceptance speeches and never-before-seen backstage and rehearsal footage. More than nine hours of bonus material. And none of it has ever been officially available before in any home video form.

But if you think this behemoth box set lays out the entire history of rock and roll (or even the Rock Hall), you are sadly mistaken. In fact, the set is so far from complete that it might make you weep. And what you do get is pretty much a Beetlejuice/Linda Blair kind of whiplash-inducing, head-spinning jumble:

PROBLEM: The performances, speeches and whatever else are not in chronological order. In fact, they’re not in any kind of order whatsoever – not by theme, musical style or era. In fact, watching any one of these nine discs is likely to give you a headache, making you constantly leap back and forth across the history of rock and roll timeline.

PROBLEM: The performances are split up and spread out through various discs, making any kind of continuity virtually impossible. Disc One, for example, features Eddie Vedder fronting the surviving Doors on “Light My Fire.” Their version of “Break on Through” doesn’t surface until Disc Five, however. And if you want to see their joint rendition of “Roadhouse Blues,” you’ll have to switch over to Disc Seven. That just makes no sense whatsoever. One of the only bands represented by three consecutive songs on the same disc is the Pretenders (“Message of Love,” “My City Was Gone,” “Precious”).

PROBLEM: For the most part, the requisite All-Star Jam is pretty much a sloppy mess, not a mind-altering revelation. This is true whether it’s a bunch of Nippertown bands playing a food bank benefit at Tess’ Lark Tavern or a bunch of multi-millionaire rock superstars at the Hall of Fame. Oh sure, we’ll admit that it’s a hoot to watch Robbie Robertson, Eric Clapton, Melissa Etheridge, John Sebastian and Bonnie Raitt backing up James Taylor on “How Sweet It Is.” And it’s great fun to see Roy Orbison and Bruce Springsteen going toe-to-toe on “Oh Pretty Woman.” But ultimately, the end results are nothing special, and each of those specific performances is pretty much a bona fide disaster.

PROBLEM: And most importantly, there are any number of glaring – and completely unacceptable – omissions, undoubtedly due to contractual hoopla. The Kinks, for example, aren’t represented anywhere except on the final disc of the set, which features performances from the 1995 Concert for the Rock and Roll Hall of Fame held at Cleveland’s Municipal Stadium, where Ray Davies offers a cruise-control rendition of “All Day and All of the Night.” There are no performances by Bob Dylan (though you can see him strumming along and lurking onstage during the all-star version of “I Saw Her Standing There” that also features Mick Jagger and Bruce Springsteen). No Led Zeppelin, either, although Jimmy Page pops up to play “The Train Kept A-Rollin'” with Jeff Beck, Ron Wood, Joe Perry and Metallica. No Beach Boys. No Supremes, Johnny Cash, Joni Mitchell, Van Morrison, David Bowie, Grateful Dead or Simon & Garfunkel. And the list of the missing goes on and on…

All of which is not to say that you can’t find some some truly transcendent, rock and roll golden moments scattered throughout the nine-disc time capsule.

There’s Little Steven Van Zandt’s induction speech of the Rascals (which helped land him his role on “The Sopranos”). Springsteen and the E Street Band backing up Chuck Berry for “Johnny B. Goode.” And Prince’s torrential, absolutely mindboggling guitar work on “While Guitar Gently Weeps.” We might be going waaaaay out on a limb here, but at the moment, we’re thinking that it’s simply the greatest guitar solo we’ve ever seen.

On the other hand, do you really need a nine-DVD brick clopping up your bookshelf when you can see Prince do his magnificent thing anytime you want on YouTube?

Bettye LaVette, What Was the First Record You Ever Bought?