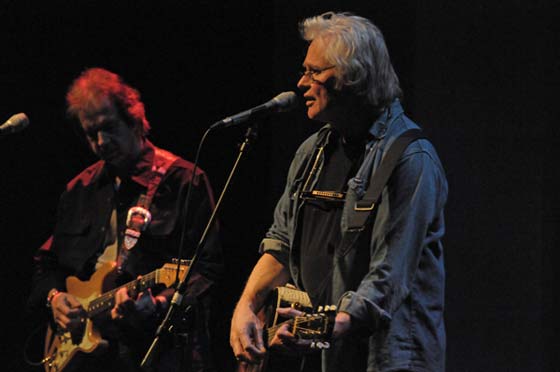 What do Jimi Hendrix, the Troggs, reggae star Sister Carol, comedian Sam Kinison, LA punk pioneers X, Cheap Trick, Hank Williams, Jr. and a host of other musicians over the past almost half century have in common?

All of them have performed and recorded singer-songwriter Chip Taylor’s seminal 1960’s hit, “Wild Thing.”

Laid back and possessing a warm, inviting voice, Chip Taylor fronted his trio at The Linda in Albany on Friday night before a small but devoted audience of fans. He sang, strummed his acoustic guitar, occasionally blew a harmonica and shared stories of his long and distinguished career.

At his side, magnificent electric-guitarist and former Van Morrison sideman (the “Moondance” and “Domino” period), John Platania added solid rhythm and colorful solo accents to Taylor’s tales. Bassist Tony Mercadante held down the bottom end beautifully, making the absence of a drummer a moot point.

Taylor finished his show with a set of encore songs, including – of course – a rousing version of “Wild Thing,” complete with a rousing sing-along.

Then he paused with a self-reflecting smile and admitted that he had almost forgotten something – the title song of his new album, “Yonkers, NY.” He quickly rectified the situation, launching into the country-folk flavored song, his weathered and haunting voice vividly conveying his childhood remembrances.

Review and photograph by Andrzej Pilarczyk

SECOND OPINIONS:
In The Daily Gazette, Brian McElhiney wrote, “It felt more like Chip Taylor’s living room than a concert when the legendary songwriter performed at The Linda Friday night. The country singer and guitarist, best known for writing ‘Wild Thing’ and ‘Angel of the Morning,’ held a small crowd spellbound for more than two hours with songs and stories from his latest album, ‘Yonkers NY.’ As the album’s title suggests, the songs deal with Taylor’s childhood in Yonkers, and the show served as a loose narrative of Taylor’s life, from his humble beginnings as James Wesley Voight growing up with brothers Jon and Barry, to playing in one of two country bands in New York State, to his years as a professional gambler.”