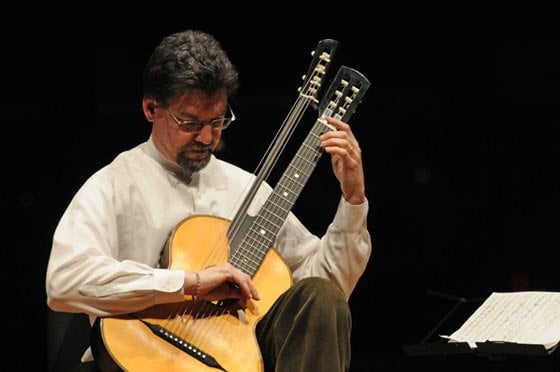 Like a fine wine complements a gourmet meal, the acoustics of Skidmore College’s new Zankel Music Center were a perfect match for the rich, full tones of internationally renowned classical guitarist Robert Trent on Thursday evening. Without any means of amplification at all, every single note, every intended nuance could be clearly heard from Trent’s small guitar anywhere in the concert hall.

Trent performed marvelously in the style of Johann Scherzer (ca. 1850) on his unique, 10-stringed guitar. The addition of the four top bass strings on a separate neck jutting at a slight upward angle extended the length of the fretboard, allowing Trent to play harmonics far surpassing the tonal range of a standard six-string guitar.

Trent opened the evening’s program with Coste’s “La Source du Lyson, Op.47.” His fluid passages made the Lyson River flow outside the glass-wall backdrop of the Zankel’s Filene stage. Up next was a moving juxtaposition of Fernando Sor’s “Fantaisie Elegiaque, Op. 59,” composed as a memorial to the composer’s only daughter, with the powerful Trent original, “Tolkien Suite.”

On the Sor piece, the droning bass rang out as funeral bells, while on the Trent work, the lighter melody was reflective with a delicate, ringing, ephemeral tone.

Trent had stated earlier that with the “Tolkien Suite,” he took solace in creating that work on the evening of the 9/11 tragedy. He also added that the piece reflects the central character Frodo in “Lord of the Rings” overcoming Evil and being able to make his life matter.

After the intermission, Trent returned with a six-string acoustic guitar, and the performance took on a Spanish flavor with a vibrant interpretation of Manuel Ponce’s “Variations and Fugue on La Folia d’Espana.”

He concluded the evening’s program by bringing back the 10-string and launching into two lyrically dynamic movements from Johann Kaspar Mertz’s “Trois Morceaux Op. 65.” After several rounds of applause, the small but appreciative audience left the hall satisfied and well sated. Just like after the perfect meal.