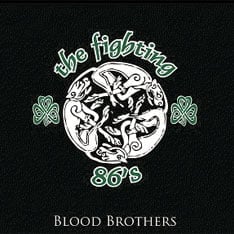 The Celtic trio of Nippertown music scene veterans actually made their recording debut back in January – backing up tireless troubadour Frank Jaklitsch for a handful of tunes on his latest album, “Some Hearts.”

But “Blood Brothers” is the official full-length debut from the Fighting 86’s, and it’s a fitting representation of the band, a perfect blend of old and new, urgent vocals and instrumental prowess.

The album takes off like a shot with the traditional fiddle ‘n’ drum-driven instrumental “Bodhran.” It kicks the album into high gear and then steamrolls to its rousing conclusion, all in under two minutes.

Over the course of the album, guitarist-vocalist Brian Gibney, fiddler Mark Frederick and booming bodhranist Steve Butler make the most of their acoustic three-piece sound. This is definitely a band where the whole is greater than just the sum of its parts.

They rock ‘n’ reel through four traditional tunes and bring things up-to-date by putting their own stamp on a bushel of tunes plucked from the songbags of the Waterboys (“Fisherman’s Blues”), Flogging Molly (“Devil’s Dance Floor”), Dougie McLean (“Ready for the Storm”), the Saw Doctors (“Green and Red of Mayo”) and, yes, U2 (“Bad”).

They leaven their rousing sound with a yearning, stately take on Jay Ungar’s classic fiddle ballad, “Ashokan Farewell.” And while the band includes only two original tunes, both of them – Gibney’s churning “Cow Dung” and Frederick’s instrumental reel “One Take Johnny” (featuring some sparkling, Spanish-filigreed guitar work from Gibney) – quite capably stand up alongside the songs of their contemporaries.

Bringing it all back home, they wrap up the album with a special guest appearance by Jaklitsch, who steps up to the microphone for the traditional gospel-blues, “John the Revelator,” as Gibney plugs in to deliver some tasty electric blues licks.

The Fighting 86’s launch “Blood Brothers” with a CD release party at the Round Lake Pub in Malta at 6pm on Sunday.

A Few Minutes With… Yeah Universe on their Debut EP, “In Tandem.”