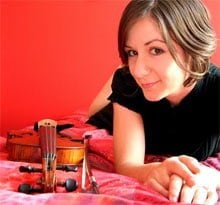 1. THE FIRST ALBUM I EVER BOUGHT WAS … Ha! The Dave Matthews Band’s “Under the Table and Dreaming”

2. THE FIRST CONCERT THAT I EVER SAW WAS … Ooohh… that’s hard to remember, I started going to concerts with my family at a really young age. It’s probably impossible to determine what the VERY first one was, but it could have been a big annual contra dance in town called “A Mighty Cloud of Fiddlers.”

3. THE FIRST MUSICAL INSTRUMENT I EVER OWNED OR PLAYED WAS … recorder

4. THE FIRST SONG THAT I EVER PERFORMED IN PUBLIC WAS … “Twinkle Twinkle Little Star”

5. THE FIRST BAND I WAS EVER IN WAS … a family band with my little brother. I think we were called Fiddlesticks.

New England fiddler-folksinger Lissa Schneckenburger and her musical partner Bethany Waickman will perform at 7pm on Thursday as the next installment of the Folklife Concert Series at the Crandall Library in Glens Falls. Admission is free.