Commander Cody, What Was the First Album You Ever Bought? 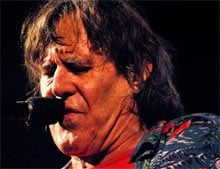 “I remember the first record album that I ever owned. For Christmas in 1956, my dad gave me Stan Freberg’s ‘A Child’s Garden of Free Verse,’ which is one of the funniest things I’ve ever heard. He puts on all the hits of the day from ‘The Banana Boat Song’ to ‘The Great Pretender.’ I just cracked right up, and it’s still funny to this very day.

But the first album that I bought myself was probably the ‘Freewheelin'” Bob Dylan album, which I bought within the first two weeks that I was in Michigan in ’62. It’s the first one I remember buying. And that’s another album that really stands up.”

Commander Cody re-teams with John Tichy – one of the original members of his Lost Planet Airmen – on Saturday night at Daisy Baker’s in Troy, as he steps into the spotlight as special guest with the Tichy Boys.