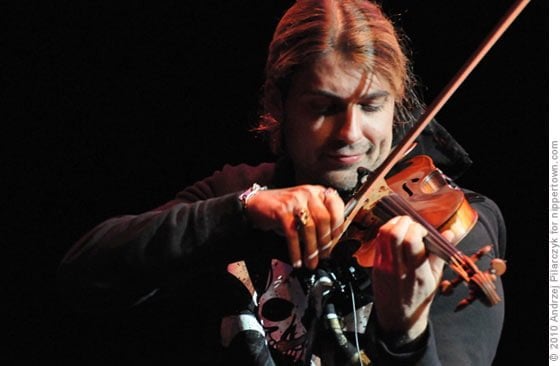 Though his roots are in firmly planted in the classical music tradition, German-American violin virtuoso David Garrett – who made his Nippertown concert debut at The Egg on Friday – has made some surprising career-choices along the way.

He won his first violin competition at the age of five and released his first record at 14. And he studied at Juilliard – with Itzhak Perlman, no less.

But he also modeled for Armani. And he’s earned an entry in the 2010 Guinness Book of World Records for the fastest performance of his encore piece that evening, “The Flight of the Bumblebee.”

However, he’s made his boldest mark, musically speaking, by branching out into a plethora of modern-song idioms. On stage at The Egg, serious Bach and Vivaldi compositions danced through Garrett’s violin bow alongside rocking tunes by AC/DC (“Thunderstruck”), Queen (“Who Wants To Live For Ever?”) and Metallica (“Nothing Else Matters”).

Touring hot on the heels of his popular PBS special, “Live In Berlin,” an appearance last month on “Oprah” and his self-titled American debut CD release, the 28-year-old former child prodigy delighted the crowd with his classical-pop crossover cornucopia.

He seemed perfectly at home in the spotlight, whether performing Bill Withers’ bluesy “Ain’t No Sunshine” or “He’s A Pirate,” (the “Pirates of the Caribbean” film theme) or simply interacting with his crack back-up band of keyboardist John Haywood, drummer Jeff Lipstein, bassist Jeff Allen and Marcus Wolf, who offered equal prowess on classical acoustic guitar and rocking electric.

In front of a sold-out house where the women easily outnumbered the men, Garrett bobbed and weaved with a prize-fighter’s stamina and played with a showman’s passion – much to the delight of the audience. 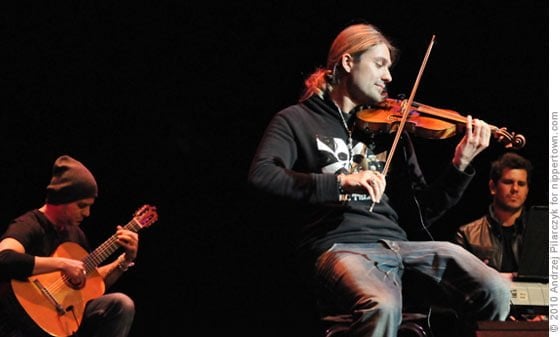 Commander Cody, What Was the First Album You Ever Bought?

ArtBeat: Behind the Lens with Andrzej Pilarczyk, Part II