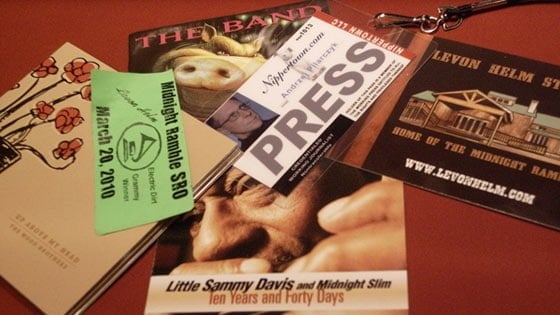 If you’re a music fan who lives in the Capital District, you owe it to yourself to head south to Woodstock to attend one of Levon Helm’s coveted and famed Midnight Rambles. Yes, it’s a steep ticket price – $150 – but most folks who have attended a Ramble tend to break out in a mile-wide smile as they excitedly recall a truly unique musical experience – perhaps even one of the most memorable concerts of their lifetime.

The schedule of special guests who will be performing along with Helm at his upcoming Rambles are posted on his website. But with every show there is always the element of the unknown: meaning that some legendary musician might just drop by to sit in with the band.

Last summer, Helm had a serious health scare when doctors suspected a return of the throat cancer that had previously sidelined the Rock and Roll Hall of Famer. Fortunately, it was a misdiagnosis, and with the removal of a non-malignant tumor, Helm is singing once again, his yearning backwoods voice set against his sturdy backbeat drumming, as he leads his Saturday night Midnight Rambles in the comfy confines of his home studio. And he’s made plans to take the Ramble on the road again this summer, too.

Over the course of more than four decades, Helm has amassed a legion of fans, both as a solo artist, as well as a member of the pioneering rock outfit the Band, whose group career reads like a series of milestones in modern American rock music – starting out as the backing band for rock ‘n’ roller Ronnie Hawkins; collaborating on the first ‘electric’ period Bob Dylan tour; recording their classic debut album “Music From Big Pink”; and as the subjects of director Martin Scorsese’s seminal concert documentary film, “The Last Waltz.”

Once you’re in the town of Woodstock, it’s just a short back-country journey that leads to Helm’s studio. Don’t blink, because you might miss the entrance and the hilly, dirt-road drive down to the gate shack.

You stop at the booth and are told the Ramble rules: no cameras or picture taking, no audio or video recording, no autographs, no drinking near the stage and a few more.

The studio building is on your right with a huge hanging banner proclaiming Helm’s Grammy Award-win for his latest album, “Electric Dirt.” The parking lot is on your left with what looks to be at least a half-dozen tailgate parties is full swing. Showtime is usually 7:30pm, and the studio doors open about 7pm. And shortly after the gates to the grounds open at 6pm, the entrance already has dozens of people waiting in line. Seating is general admission. 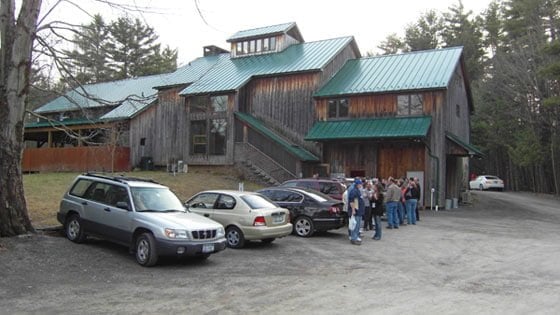 Once inside, you see the large stage area nestled in the center of the room with a cathedral ceiling high above it. The split-level balcony wraps around three sides of the instrument-laden bandstand, and there are Oriental carpets and runners everywhere, including on the stage. The wooden structure and railings are a light, natural color, and all of the lights, recording mics and studio equipment are unobtrusively hidden. It’s like being in someone’s comfortable and intimate living room – albeit without a large screen TV dominating the view.

Then the music begins. The opening act stepped into the limelight with 81-year-old blues singer and harp-man Little Sammy Davis taking his seat and counting off the first number. Accompanied by Fred Scribner on acoustic guitar, the 45-minute set of classic blues numbers included “Rollin’ and Tumblin'” and “Shake, Rattle and Roll,” all highlighted by Davis’ warm, raspy-whisper of a voice.

Up next, the Wood Brothers duo settled in behind the stage’s front line of mics and monitors. Acoustic guitarist-singer Oliver Wood sat in his seat addressing the audience, while his brother Chris Wood (from jam-jazzers Medeski, Martin & Wood) wrapped himself around his double-bass. The siblings launched their set with “Liza Jane” from their indie-release of cover-tunes, “Up above My Head.”

Within a song or two, the brothers’ touring percussionist Tyler Greenwell slid in behind Helm’s drum kit, adding considerable percussive color to the impassioned country-folk-rock mix. And, yes, unannounced special guest John Medeski sat in on melodica and Hammond B3 organ for several tunes slated for the brothers’ upcoming album release. A rousing version of “Pray Enough” from their latest Blue Note album, “Loaded,” wrapped up their hour-long set.

The applause rose as the members of Helm’s band took the stage, and when the cheering died down the stage was complete with a full four-piece horn section (featuring tuba & bari-sax master Howard Johnson), two lovely songbirds (daughter Amy Helm and Teresa Williams), two guitarists (the Band’s guitarslinger Jim Weider and Larry Campbell), a bassist, the dynamic Brian Mitchell on keyboards and Levon Helm himself sitting at the drum kit, shooting out smiles to the lucky members of the 250-plus audience.

Opposite him at the other end of the stage was the evening’s other unannounced special guest – Steely Dan’s Donald Fagen sitting at the grand piano. What an unexpected musical treat.

With the musical line-up shifting from the full band to a pared-down trio, one song rolled seamlessly into another. “King Harvest,” “Fanny Mae,” “All Your Love,” “Something to Remember,” “Tennessee Jed” and more than a dozen more tunes were dished out, brimming over with vocal passion and instrumental prowess, to the ongoing delight of the full house.

Somewhere in the middle of Dr. John’s Crescent City classic “On A Mardi Gras Day,” the place really started jumping, and the horn section marched off-stage and through the audience, swinging their instruments to and fro in New Orleans brass-band tradition. The Band’s rocking anthem “The Weight” – with the full group, as well as the Wood Brothers in tow – wrapped up Helm’s nearly two-hours-long musical celebration as the clock neared midnight. It was truly a fantastic Midnight Ramble, as all of them are.

Anyone that was there would chalk up Helm’s Midnight Ramble experience as nothing short of magical, magnificent or even epic. You felt the awesome energy and witnessed the impassioned playing of some of the best musicians in the world. All of this music in an intimate, living-room setting came together in a night to remember for the rest of your life. 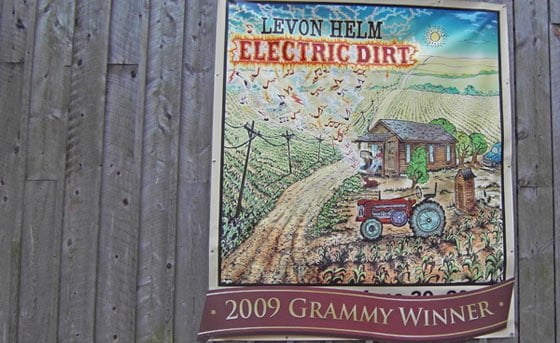