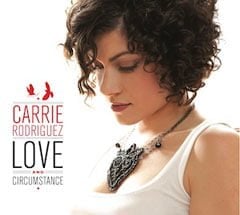 “I’m a full-grown woman, and I’m looking for a big love,” Carrie Rodriguez sings on the opening track of her upcoming album (due out on Tuesday, April 13), and it’s no idle boast.

Rodriguez has come a long, long way since the days when she was Chip Taylor’s fiddling sidekick. She still plays some fiddle on “Love and Circumstance,” her third solo album, but she really makes her mark here as a singer – at once confident, passionate and relaxed.

While Rodriguez penned most of the songs on her sophomore album, 2008’s “She Ain’t Me,” this time around she pays tribute to her musical influences, digging into the rich songbags of Richard Thompson (“Waltzing’s for Dreamers”), Gillian Welch and David Rawlings (“I Made a Lover’s Prayer”), M. Ward (“Eyes on the Prize”) and Townes Van Zandt (“Rex’s Blues”).

The opening track is a seductive, open-hearted Little Village (John Hiatt, Ry Cooder, Nick Lowe, Jim Keltner) cover, and Rodriguez also nods to the Williamses – both Hank (“I’m So Lonesome I Could Cry”) and Lucinda (“Steal Your Love”).

Her shimmering, soaring rendition of Buddy & Julie Miller’s “Wide River to Cross” is one of the album’s many highlights, and Buddy also steps up to the microphone to add some vocal harmonies on Merle Haggard’s “I Started Loving You Again.”

Rodriguez is not only an agile instrumentalist, a talented songwriter and a sweet, sweet singer, but – as this album proves in spades – she’s also quite a masterful, poignant interpreter.

Carrie Rodriguez and her band – guitarist Hans Holzen, bassist Kyle Kegerreis, drummer Eric Platz and pedal steel player Luke Jacobs – kick off their U.S. tour in support of the upcoming album at the Van Dyck in Schenectady at 7pm on Thursday. Tix are $15 in advance; $17 at the door. Her tour will also bring her to the Bearsville Theater in Woodstock at 8pm on Sunday, where Milton opens the show. Tix in Woodstock are $15.