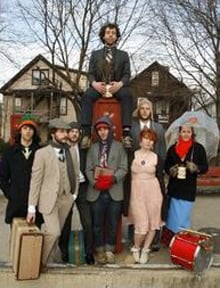 Imagine our surprise (and delight) to open up The Sunday New York Times and see a photo of Nippertown’s own fave rag-tag band of roving troubadours Sgt. Dunbar & the Hobo Banned.

We almost missed it – and you might have, too – because it certainly wasn’t where we might have expected to find it.

No, not in the “Arts & Leisure” section. Not even in the “Sunday Styles” section. (Let’s face it, the Hobos do indeed have a style all their own.)

Instead, there they were in the “Sunday Business” section. Prominently featured in the story “You, Too, Can Bankroll a Rock Band” by Randall Stross, who interviewed Sgt. Dunbar’s Alex Muro.

The story was about bands utilizing fan-supported websites like SellaBand, PledgeMusic and Kickstarter, and it pointed out the Hobo Banned as a “success story” for raising more than $3,000 through Kickstarter to get the band to the SXSW festival in Austin last month.

Illustrating the story was a nice big photo of Sgt. Dunbar – in full-color, no less – as well as a screen-grab from their Kickstarter page.

Kevin Maul, What Was the First Album You Ever Bought?