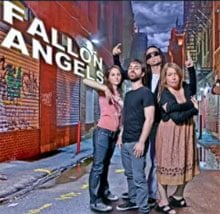 The week’s only half over and Nippertown has been transformed into Media-Celebrity town.

We mentioned earlier that Sgt. Dunbar and the Hobo Banned were featured in an article in Sunday’s New York Times, discussing their experience using Kickstarter to raise funds to get them to SXSW last month.

Then commenter Mike H chimed in with the news that Jason Martin briefly met French first lady (and chanteuse) Carla Bruni-Sarkozy at his NYU studio and showed her a video of a French poodle in a military uniform. The New Yorker was there to write about it. (UPDATE: via Paul Rapp, here’s a link to the video Jason showed Carla Bruni-Sarkozy [Youtube].)

And then last night, hometown heroine Erin Harkes and her brand spankin’ new band – or should that be her brand new spankin’ band? – made their national television debut on “Late Night With Jimmy Fallon.” Yeah, you read that right…

Yesterday morning, Harkes posted her Facebook status as “Erin Harkes is going to the big city for the day. I’m not coming back without my very own celebrity.” And she made good on that promise. Big time.

Harkes and her band the Rebound played at Tess’ Lark Tavern on Saturday night, but on Wednesday, she had a whole new band as she was a participant in a segment that Fallon calls “Battle of the Instant Bands.” The concept is that two teams – each comprised of four members of the studio audience members who happen to be musicians – are selected, thrown together for a few minutes to write and rehearse a song. Then they perform it. On national television. Nothing like a little pressure, eh?

Nippertown favorite Harkes was one of the chosen ones. She grabbed a microphone, and her new band – dubbed Fallon Angels – whipped up a sturdy blues-rocker titled “Free Jimmy.” Harkes was given plenty of room to wail and she did just that. Oh my, did she!

And, oh yes, Harkes and Fallon Angels handily beat out the other instant band, Battle Axe, emerging victorious with some prizes to boot.

No date has yet been announced for the release of Fallon Angels’ debut CD.