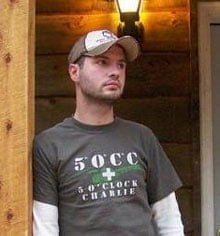 1. THE FIRST ALBUM I EVER BOUGHT WAS … My father had a great collection of albums that I listened to from infancy and still listen to today. CCR’s “Pendulum,” the Steve Miller Band’s “Greatest Hits,” Neil Young’s “After The Goldrush,” the Beatles, Iron Butterfly, Rare Earth…the list goes on. But the first album I ever bought was Kiss – actually Peter Criss’ solo album. In 1978, Kiss released four solo albums – one from each member of the band. I got them all eventually, but Peter Criss was my hero, so that one was first.

2. THE FIRST CONCERT THAT I EVER SAW WAS … Well, I was at a Three Dog Night show in my mother’s womb, but I suppose that doesn’t count ’cause I didn’t really see it. The first concert I remember seeing was Blood, Sweat and Tears at the Starlite Music Theatre. I was young, maybe five or six. The first concert I asked my father to take me to was Kiss at the Glens Falls Civic Center in 1983. We drove through a blizzard to get there, but we were warmed by the 12-foot high flames shooting from the stage. What a show!!!

3. THE FIRST MUSICAL INSTRUMENT I EVER OWNED OR PLAYED WAS … My father’s drum set. He was in a band called the Sounds when I was a kid, and I would always bang on his drums every chance I could. Eventually, I got good.

4. THE FIRST SONG THAT I EVER PERFORMED IN PUBLIC WAS … “The Final Countdown” by Europe. It was at a talent show at Algonquin Middle School in Averill Park. We rocked that auditorium! The first song I ever performed solo – which is a different type of experience altogether – was “Walking Down The Road” by the Ozark Mountain Daredevils. I was at the Eighth Step Coffeehouse Open Mic. I was so nervous I could barely keep my legs from shaking. I don’t remember if I sang all the right words and played all the right chords ’cause I began paying more attention to tapping my foot to the beat in order to stop my legs from shaking.

5. THE FIRST BAND I WAS EVER IN WAS … Aerial Flash, the same band I played the talent show with. We were a three-piece – guitar, keyboards and drums. I played the drums. We played a few school dances in 7th and 8th grade, and that was pretty much it. Once I hit high school, I was way more into Zeppelin, Sabbath and Metallica and wouldn’t be caught dead playing anything by Europe or Bon Jovi.

Don Ackerman pulls double-duty on Friday night for the first night of the fourth annual Root-A-Rama at Valentine’s Music Hall in Albany. Ackerman will be playing with both Diego and the New Santa Monica Flyers (who will be performing Neil Young’s “Tonight’s the Night” in its entirety). Also on the bill on Friday are the Overland Gunslingers from Greenwich.