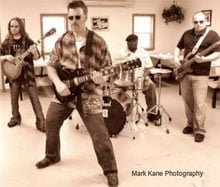 Nippertown rockers Cuttlebone are about to unveil their debut CD on Tuesday night at Red Square in Albany. And it’s been a long time coming.

After years of frustration banging around the local cover-band scene, vocalist-guitarist Berto decided to take things into his own hands. The band – which also features guitarist Nemo, bassist Josh Vicars and drummer David Gordon – spent the past two years holed up in Albany’s Hyland Recording studio, and now they’ve finally emerged with “Welcome to Joe’s,” their debut album.

Co-produced by the band and Ted Hyland, the album is an eclectic smorgasbord of rock styles from classic rock to funk, from blues to synth rock. As the band declares their website, “The album plays like a diner menu – all home-cooked and something for every taste.” Tracks from the album are already enjoying airplay on WEXT-FM and WEQX-FM.

On Tuesday night, we’ll finally get the hear the whole album.

The CD release party kicks off at 7pm, when fans can partake of a diner buffet (in tribute to the album’s diner theme). Indie rock duo Next Station – featuring guitarist-vocalist Will Pedicone and bassist Matt Eisenstein – launch the live music portion of the evening, followed by Cuttlebone, who will perform the new album in its entirety. Also as part of the festivities, the band will premier the music video for one of the album’s tracks, “Greasejoint.” The video was directed by Jeff Knight of Knight Owl Entertainment.

Admission is $10, which quite a damn good deal when you consider that it includes food and performances by two bands, as well as a copy of “Welcome to Joe’s.”