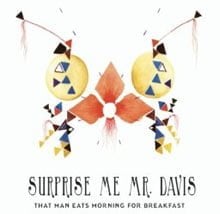 They call it “electro-folk” because, well, I guess ya gotta call it something.

Shake it; don’t stir. Top it all off with an ample dose of keyboardist extraordinaire Marco Benevento, whose own solo album, “Between the Needles and Nightfall,” is due out next month.

That’s the recipe for Surprise Me Mr. Davis, who first got together back in 2004. Their new CD is being officially released today, but it’s already been bouncing around under the radar as “the demo sessions.”

As Moore explains, “I was on my way with Marc Friedman to Montreal where we were going to record in Brad and Andrew Barr’s new studio. Unfortunately, I got turned away at the border. We soon found ourselves back in Burlington, Vermont drinking in a bar. Brett Hughes, a local musician there, was like ‘just come into my barn studio and do it.’ So Brad and Andrew came down this way, and we ended up recording there all week at Brett’s house. We got all these tracks done and then we went back into another studio and tried to work them up even bigger, but we started to feel that we were exceeding our initial ideas by trying to make them too big. In the end, we reverted back to the original demos. They had the raw spirit and energy we were trying to capture. So now it is finally seeing the light of day.”

SMMD is tagging the seven-track CD as an EP, although it clocks in at 33 minutes long, which is certainly lengthy enough to proudly wear the title of “album,” rather than EP.

The music is delightfully eclectic, opening with the swirling, chiming, semi-psychedelic, “Roses in Bottles,” which bears the influence of “5D”-era Byrds. “Sissyfuss” slams into a funky, riff-driven jam-band groove. “I’m No Good at All” kicks off like a slab of post-punk noise-rock, and then takes off like some hot-wired Celtic-rock jig. With its toy piano intro, “Emily Green” leans hard in the direction of harmony-laden ’60s British Invasion pop.

You get the idea. Everytime you think that you might have some idea of what’s coming next, SMMD shifts gears to give you something totally unexpected. Surprise me, indeed.

Surprise Me Mr. Davis plays their second show of the year at Red Square in Albany at 9pm on Tuesday. The opening act is Sugar Proof. Tix are $13 in advance; $15 at the door.

Joshua Redman, What Was the First Album You Ever Bought?