(Via J. Eric Smith) Stupid Fight lets you compare the messages sent to two twitter feeds and, based on a variety of criteria, makes a pronouncement as to whose fans are less bright.

Stupid Fight can’t go out and administer an intelligence test to each person that’s sending messages to a celebrity. So instead, it estimates based on several stupid indicators. Are they using twenty exclamation marks in a row? Do they endlessly use the abbreviation ‘OMG’? Do they seem incapable of working out where their Shift key is? These indicators have a strong correlation with the message, and its sender, being stupid. 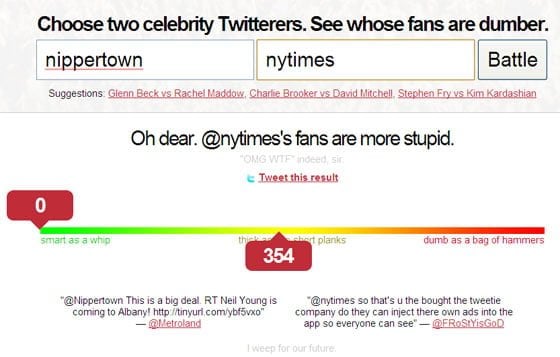 Jakob Dylan, What Was the First Album You Ever Bought?